The Sound of Alone

Now, do you remember your dreams?
Like the chair remembers
Your bends
And dents accordingly

Recite them, please
Those whispers of verses
That itch for release
And the twitch of desires
That hide underneath

Will you simply turn the volume up
And drown them out
Like you drowned the floor in clothes
That your heart was too heavy to fill?

Empty their contents
Into greedy ears
And voice them!
Savour them on your tongue
And then spit them into life!

For it is night
And the cars outside are nearly still
And the streets are drunk
In revelling
And there is music
Oh, there is so much music
Embedded
In the back of your throat

Can you taste each note?

Like your memory
Of this feeling
When you awake
To the drip of the tap
And the warm of the shower
And the mind of the gap
And the rush of the hour
Posted by thinktank at 01:28 2 comments: Links to this post

Woo weee! It's all happening! (The wise old owl has landed!)

Sage & Time is celebrating its first birthday, and I'll be one of about 30 poets to bless the stage. Looks like it's going to be a very packed, fun-filled night!

Posted by thinktank at 15:03 No comments: Links to this post

I think I'm turning into a cynic.

Yeah, I know. Roll your eyes, kiss your teeth. Whatevs. I don't actually want to be cynical about certain things but it's this part of my nature that keeps bursting out. Worse still, I look for a cure on Google by typing "Cure for...", and it tries to autofill the rest, like it knows me. First up, it thinks I'm looking for a cure for cancer. And then Aids. (Try typing in the results for either and you'll be in cynic heaven). So when I finally get cynicism down, the first results that come up are no help whatsoever. First, there's a site claiming an exceptional American Rabbi to be the ultimate cynic cure. But nothing about the practicalities, although I guess it would help if I were Jewish. And it would help if he were still alive (he died in 1994). And then there's the Cynic's Sanctuary, which lists 714 things to be cynical about, which can only exacerbate the problem. So before I get bored, I randomly select another page, which suggests Tokyo is the perfect cure to cynicism. But, apparently, I have to lose something there first and look for it the next day, or week, or whatever, because the Japanese - or, more specifically, the people of Tokyo - are very honest and like to return things. So, in 2005 (the article was written in 2006), 100,247 mobiles were reported missing and, of those, around 90,000 were handed in to the police.

Sorry, I don't mean to be cynical, but I'd hate to buy a ticket to Tokyo so I can lose my phone, just so I can end up being one of the 10,000 people who don't get theirs back...

The other thing on my mind that everyone's talking about is the News of the World/ Murdoch Empire story. For me, it's starting to wear thin. I know people who gladly read sensationalist stories and talk about celebrities as if they know them. I'm guilty too of flicking over to 24-hour news channels, as if there's a constant stream of stories out there (and I suppose there is, but most of the stories are deemed too uninteresting for public consumption). And I feel like I'm the only one who wasn't surprised there was a lot of illegal activity. How else do you feed public thirst for the latest scandals? Are people just going to volunteer to hand over their dirty laundry for public inspection? Methinks not.

So, whilst I'm glad to see such a hateful paper go, and some of the power behind it, I don't think it will end corruption, either in the media or the police. And I think there is greater political corruption to be uncovered. And, worse still, there are other papers out there making money out of it by playing the  "sanctimonious card" with really bad morals...

For instance, I was suprised when the Norwegian Massacre story broke out and no one knew any details about the killer. Yet, the following day, The Sun decided to run an article calling it "Norway's 9/11" and there were reports about how Al Qaieda has begun using "blue-eyed blond haired" allies to carry out its atrocities. I can't really state my point more eloquently than Will Sturgeon does on The Media Blog, but it really does seem that speculation has become the new news. So, whilst on the one hand, there are papers illegitimately sourcing information to fill their pages, there are others out there with nothing to go on, filling it with rubbish that may or may not be true.

To highlight the point, when Amy Winehouse was reported dead, I knew it would be a matter of minutes before all the stories came out about her going on a drug binge etc etc. But, according to actual reports so far, no cause of death has been stated. And no drugs were found at her house. So, for now, it should be left simply as that. She's had a colourful enough time of it in the past few years without the need to embellish her departure with more tales of drugs cocktails before bed time.

She was almost certainly Camden's most famous resident. And despite the celeb status, she was only a few months older than me, and lived only a few minutes walk from my flat, so there was something shocking for me about someone so close in age/location etc. So I was really sad to hear the news. And I still am. Although, this week has been the first I've heard of the "27 club". Once again - and, perhaps insensitively - it's a way of labelling and classifying people, this time troubled musicians who die aged 27.

Anyway, on Sunday, I walked by the Square roughly where I thought she lived, and of course, I came across the shrines. Bearing in mind I do live in Camden, I've never seen so many cigarettes and bottles on the streets, in such a small area!


I'll leave it here for now and get on with some work...
Posted by thinktank at 16:22 No comments: Links to this post

Grr! Just when I'm off work, I get a word that makes me think of work emails! If I get Windows next time, then something's up with the generator I use. Having said that, it reminds me of sitting in a workshop in Jersey, back last September, and all the participants had to use the word Vista for this free-writing exercise. I think I was the only one who had computers on the mind, so it probably says more about me than anything else...
Posted by thinktank at 14:28 No comments: Links to this post

But this is life
This is the news
This is information

On tap
Posted by thinktank at 14:19 No comments: Links to this post

Ok, something else from the past... Again, written around 14.

I'm reluctant to post this, but I've just found this again and feel like sharing. I guess it's one of the most personal things I wrote at the time. There's enough of a gap between now and then but I still find it troubling to read: 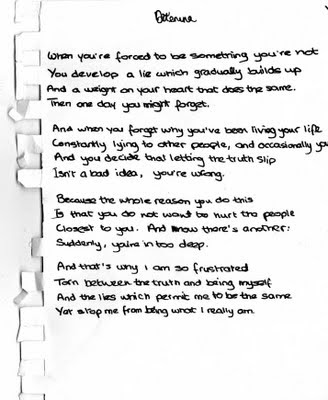 Posted by thinktank at 13:50 No comments: Links to this post

How mysterious!
Posted by thinktank at 23:01 No comments: Links to this post

I'm remembering how to enjoy writing prose. Yesterday, I finished a short story which is, frankly, not an easy read - nor was it easy to write - but it was certainly a lot of fun.

They say you should start off with what you know, and I know what British rain is like, and I know what Pentecostal churches are like, and I married them together - with the help of some actual rain in the background and a text back from my brother, reminding me of a few ol' time choruses.

On the poetry front, I haven't written much this week, but I have been reading. Which is good, I suppose, as I like to think of myself as much more of a reader than a writer. And I seem to be buying more books than I can read at the moment. So at least I know how I'm going to be spending my summer...
Posted by thinktank at 15:23 No comments: Links to this post

It's just another square, today
Trees, grass, a statue or two and traffic stuttering along
Me on the top deck
Sat next to a man in pinstripe
With bad taste in Lady Gaga songs

But his white leads aren't connected to any bombs
And soon this bus will pass
Until we reach another square
And then my stop
Where I get off
Limbs intact and late again
And damp with summer rain
Posted by thinktank at 18:05 No comments: Links to this post

At LOTF tomorrow and looking forward. Back Sunday, with any luck...

More deets at http://www.loungeonthefarm.co.uk/, and possibly a couple of tickets still going!

Posted by thinktank at 17:05 No comments: Links to this post

POST- COMMENT: Yeah, I didn't think about the significance of choosing this particular one until just now... Hence I've just written Tavistock (above).

Something else I wrote around age 14... Handwriting's meant to improve with age, apparently, but mine's definitely got worse:

Posted by thinktank at 16:59 No comments: Links to this post

I like this one... a lot to work with
Posted by thinktank at 16:53 No comments: Links to this post

So, since I last updated this blog, we've seen in a new month, and I've celebrated a new year of my life. I miss being excited about getting older! But it's just another year, and I wasn't all that enthused about the whole thing, so I didn't really celebrate that much - although, actually, thinking about it, I never have done.

According to the hurricane poem I remember from childhood, July is the month to "stand by". (June = too soon). And I do feel this is a bit of a standby month. I'm waiting for school to break up, so I'll have more time free to write and travel, and I also have my fingers crossed for a couple of projects, which I'm waiting to hear about.

I had an interesting conversation with a friend last night and, it's true, no matter what you do - even if it's meant to be enjoyable - it's very easy to be so busy that you don't give yourself the time to enjoy it all. Up to now, that's how I've felt about writing prose. If I'm working on the novel, I need to give myself enough time to clear my head and connect with the characters I'm writing about. If I'm too busy, it doesn't work - my head space is someplace else and, at best, all I can write is a mediocre poem or a paragraph that gets deleted the next day. So I'm making it my duty to spend enough time with my characters, and allow myself to get absorbed in them. It's pretty hard to do when I have my phone on and I'm sitting at a computer that's connected to the internet - I have an awkard love/hate relationship with Facebook, Wikipedia, YouTube and Gmail - but it seems impossible to be totally rid of them.

In any case, I've decided that this is a winding-down month for my social life - and perhaps for poetry too - and it's time I start completing this thing!! Further update on the novel to follow!
Posted by thinktank at 16:41 No comments: Links to this post