Modern poetry geeks will understand all the hype around the Golden Shovel, a poetry form invented by Terrance Hayes as an ode to the late Gwendolyn Brooks. Many American high school students are already familiar with Brooks' poem 'We Real Cool', although this side of the pond, her work isn't very well known.

Hayes's 'Golden Shovel' poem embeds Brooks' poem inside his; the technique he used has launched many poetry classes in recent years! It's a neat way of honouring poets you respect and I've used the form a few times... In case you don't believe me, I have Golden Shovel poems in my pamphlet (cough cough!) and in forthcoming work.

So... it was only a matter of time before the first Golden Shovel Anthology came out in honour of Gwendolyn Brooks. Peter Kahn, who set up the Spoken Word Educator programme, helped to bring about this mega volume, and I'm mad pleased to have a poem of mine accepted in the anthology alongside fellow colleagues Raymond Antrobus, Catherine Brogan, Indigo Williams and some heavyweight poets both sides the Atlantic and beyond. It's available to buy from the University of Arkansas Press, or you can wait 6 weeks or so for its Amazon release. I can't wait to get mine! 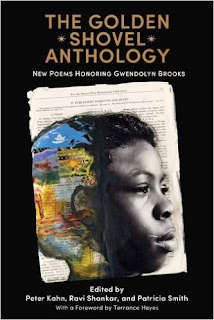 Part of the reason I've been quiet on the blog is I've been busy precariously balancing several projects. I'm now at the stage of my PhD where I go through the 'upgrade' process. For the uninitiated, that simply means I can't technically call myself a 'Doctoral' student until I hand in a third of my thesis and my supervisors sign me off as sufficiently proficient to continue. If I don't pass, then I stay in 'MPhil' limbo. Basically, it's a big deal!

I've also managed to perform at a couple of gigs, judge a Smut Slam, attend several workshops and generally ease into the year while trying to avoid any mention of Br**** or Tr***. I'm doing a couple of school projects too, and in two weeks, I'll be taking a group of students up to the Houses of Parliament to deliver speeches they've written there!

Meanwhile, now that I've conducted most of my non-creative research and I've moved on to the creative stage, I've started to work on my novel again. I've also taken on another couple of projects that involve me looking at the history of London and constructing short narratives around that. I'll be able to say more when I can make sense of it myself. And, meanwhile, the book loans have been stacking up. 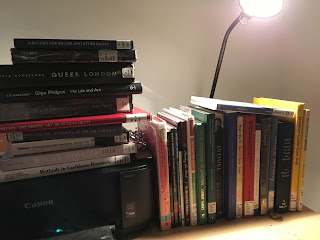 and more info is on the Upcoming tab!

5) Other things I'm looking forward to, in no particular order...

Currently listening to: Solange (again)
Posted by thinktank at 11:26 No comments: Links to this post

Posted by thinktank at 18:08 No comments: Links to this post