Tonight is going to be fierce... 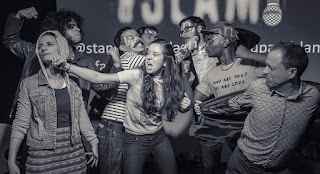 Who wins this time? Will it be poetry (yes!), will it be comedy (unlikely!), will it be a tie between poetry and comedy (never!)? Whatever happens, the audience will be the winners, and the judges... so, er, the more support us wee poets have, the better :)

It'll be a fun night in any case. Looking forward to bussing a rhyme!

Further info can be found here and here. Otherwise just turn up to the Camden Comedy Club at the Camden Head (in Camden Town... not the one in Angel) for an 8pm start and watch the battle commence.

Posted by thinktank at 09:08 No comments: Links to this post

If you’re taking the time to read this, you’re probably not walking along Hampstead Road right now…

NOTE: This has been written as a guest blog post for http://showmethemon3y.tumblr.com/ The related performance, Show Me The Money, is at Camden People's Theatre on the 14th and 15th October, 2016. Check out Paula Varjack's website here. 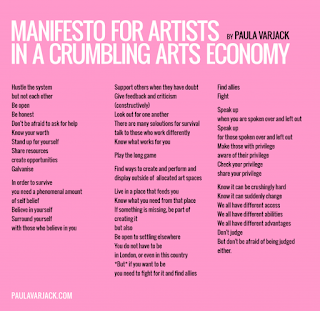 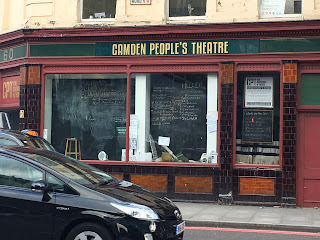 In no particular order, here are 5 things about me that may come up over the course of this blog


1) I have an exhibitionist streak
2) I’m easily distracted, particularly close to a deadline
3) I’m often overly ambitious
4) I resist being told what to do
5) I’m a full-time PhD student (this is an ongoing theme. See some of my previous blog posts)


Step into my window 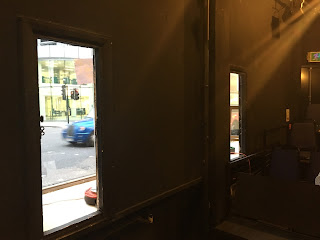 It’s Thursday morning and, for the second time in a week, I find myself cooped up in one of the window spaces at Camden People’s Theatre for a whole working day. Everyone else seems to be edging towards the weekend with more finesse, but I’ve chosen a cold, hard window.

Facebook has advised me that upwards of 4 friends are celebrating birthdays today, whoopee! An email alert has advised me that my library books are due. The wifi inside the window is non-existent so by disabling my phone data, I shut all of these concerns out and plan to get on with my work… my creative work.

Here’s the problem: the idea is to treat the theatre window as a creative space, under the watchful gaze of the busy junction where Hampstead Road and Drummond Street meet. I am late with a chapter of my thesis, which I meant to send to my supervisor last night, but didn’t. And now Hampstead Road is watching me, groggy from an unsettled night and two coffees short of any coherent thoughts. And I’m expected to be creative? Or at least do some work related to my creative practice? Hmm…

I know this road pretty well, and this side of it is mostly just a work corridor: a lot of bus and lorry traffic coming from the north, and a lot of people running up towards Euston, a few hundred metres to the east. It’s a busy working day and most people, generally, aren’t concerned with slowing down to observe the movements of a writer in the window. I should be ok being on display; isn’t that what most people’s workplaces are like nowadays? I know someone whose office has just, over the course of a weekend,  turned into one massive open space with ‘touchdown areas’ (office jargon much?) and non-designated desks which you have to occupy on a first-come-first-served basis everyday. Presumably, in this organisation-which-I-will-not-name, meetings take place in whatever beanbag corner is free and the brightly-painted cubicle at the far end can be used for multiple purposes: namely, 1) as a toilet 2) as a place to weep for a few seconds once an hour over the personal space and privacy that has been lost.

I’m rambling because I’m distracted. This blog is meant to be about #artistwindowstudio #showmethemoney #excitingnewventure. Exclamation exclamation.

The problem is, doing what I’d otherwise be doing in the privacy of my home - except fully clothed and without access to a washing machine or Daily Politics, where I get my 60 minute dose of frustration every day - makes it more like going into an office or a library, where I’m conscious of 'performing' normality. (I won’t go into that too much, but basic things such as talking to yourself, adjusting your genitals, belching etc. become policed in public spaces, whilst, at home on your own - at least for me - they take up almost zero headspace because you do them unconsciously and, more importantly, un-selfconsciously. If I were to run on about this for another sentence or two - and I won't - I might add that I have a theory that the object of undertaking any creative endeavour is to free up as much brain space as you can, including diverting any energy invested in 'performing' the 'normal' into creating new worlds, whether that be literary, musical, visual etc...).

In short, I’m absolutely not against libraries and offices; once I’m in either, I tend to be more productive than at home. But I’m still not used to navigating that performative space when I’m writing/working creatively. This - me in window not because I happen to be in a window but because I was put here - is a performance. Tweeting, writing Facebook posts, broadcasting on Periscope (yes, I did that and attracted all of 15 viewers!), writing on a chalk board, looking out of the window back at the person who has tapped on it to check you’re a real person and not a mannequin, when you’re daydreaming, all of that is performance and takes up headspace.

And yet I choose to come back today, Thursday. I do it twice. Why?

The simple answer is:

1) I liked having that designated space for my creativity on Monday, especially as I have lots of other deadlines for non-creative things
2) I also liked the fact that I managed to edit thirty five poems and, after another couple of edits, thirty two of them will be part of my poetry collection coming out next year
3) And I also like the camaraderie that comes with working next to other artists, even if they can be a little distracting.

(Update: Rhys – in the window next to me – i.e. behind my head – is beat-boxing while practicing a lip-sync sequence; Rihanna is growling ‘Bitch better have my money…’ in the main theatre space behind this goldfish bowl, as Paula Varjack does another rehearsal of ‘Show Me the Money’ which begins tomorrow)

(Ok, a quick little diversion... The thing is, no creative practice exists in a neutral space. Yes, I write for myself but, the moment my writing becomes a spoken poem or published article, it is a public entity©. It is an attention-seeking artefact, even if the person behind it would rather be left alone. In this way, life imitates art. I put myself out there, simultaneously craving to be noticed while hating the idea that I am.)

Where was I? ...Maybe it’s because I want my creative process to be seen as work, not just by the public but by me too. If I weren’t here, the poem edits would have taken three times as long because other work would have taken priority.

The timetable of truth

Anyway, here’s how it goes: 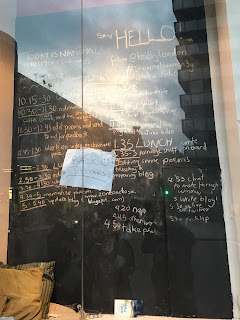 I start planning my day, setting out two different timetables on the chalk board in the window: one for what I plan to do and one for what I actually do. The latter, of course, is updated as I go along.

Over the course of the day, I learn from the window. I didn’t realise that eating yoghurt takes ten minutes. I didn’t realise that I could power nap so effectively while laying down on a hard, cold floor and having some wise guy knock on the glass (he must have thought it funny). I also didn’t realise all the other stuff about race, gender and sexuality that occupy my academic and creative concerns would follow me to there too.

This, for time and space concerns, I won't discuss in great detail. But knowing you have a window and a chalk board and that someone behind you, in a neighbouring window, has the same space (only bigger) - and you will be judged not as individuals but as a collective performance - is a bit of a weird one, especially when you're just trying to work.

Being in public is not a neutral space. People make quick judgments about you. And when they see two people in the window, one of whom (Thursday afternoon) might be lip-syncing behind you, with a big chalk sign saying THIS IS 1.5 HOURS OF DISCUSSING WHITE PRIVILEGE or when you have someone else earlier in the day (Thursday morning) rehearsing jokes about Brexit and writing interactive comments on his board (Let's cheer for Bob Dylan!), and when you have another woman encouraging people to send in jokes about Asian stereotypes (Monday), and when they come in different genders and races and, most importantly, from different disciplines (including stand-up comedy), it can sometimes make for uncomfortable working knowing that their output - unseen to you - is married to yours.

Each of my three neighbours were more interactive than I was; the public reacted in different way to each of us, from amusement to suspicion to indifference and beyond. And I wonder how much the raced/gendered dynamic played into that reaction. No one, least of all me - just trying to get on with an honest day's work - can ever tell for sure. So I will leave this comment hanging on my uncertainty.

I wanted to find a smart way to wrap this up. What have you learned, Keith? What will you take away with you? And I realise I can't put a bow on it. Working inside that tiny crawl space at the side of the theatre, with a fan heater to stop my feet going numb, near one of the most polluted junctions Central London has to offer provides no neat little moral, unless I want to push to create one.

I would love this to be an ongoing project; I would love if, next time, I could arrange for a bright big eye-catching logo in the glass which would immediately explain what we were doing there. But that would be more work. Finally, I would love to have ticked off all the things that I had planned for the day(s): editing all of my poems for this collection; sending them out for feedback; rehearsing/ memorising three new poems; drafting a commissioned piece; replying to overdue emails/messages on social media; updating my blog; chasing up an invoice; working on a chapter of my novel; reading 2 collections of poetry; ....


Posted by thinktank at 16:42 No comments: Links to this post

It's been a while since my last post, for a mixture of reasons.

A fuller update will be coming soon but, in the meantime, here's a new video, of which I'm pretty proud. It was a lot of fun writing this, I'm sure you can imagine. And it's mostly true [insert embarrassed emoji here]. So here it is, a meditation on the joys of gospel rap, fragile teenage masculinity and some French thrown in for good measure:

In other news, I'll be working in the window of the Camden People's Theatre (near Warren St) tomorrow, from 10am-6pm, as part of a live installation. Come and gawp at me :) Or drop me a line if you want to join me mid-afternoon to discuss poetry and things...

Posted by thinktank at 20:53 No comments: Links to this post