Update coming soon!
Posted by thinktank at 00:48 No comments: Links to this post

Don't forget… Archway with Words, tonight!!
Posted by thinktank at 13:39 No comments: Links to this post

NEXT WEEK: the week where I'll be popping up in different guises…

In case half of my posts sound like I'm in a perpetual state of excitement and wonder, I'm not. But in the middle of what's a pretty uncertain time for me, I'm performing in such a variety spaces that I can't help feel a little overjoyed. And I still haven't properly talked about this… (In case you haven't clicked on the link - or in case you have, and still don't understand, FLUPP is the favela literary festival in Rio de Janeiro, now in its third year, that I'll be going to in 3 weeks time)

On Monday (20th), I'll be at the launch of this anthology at Waterstones Piccadilly, after performing at another event in Soho. I'm looking forward to getting my hands on a copy - and I have a feeling Black and Gay in the UK will become an important document in years to come.

Tuesday, I'll be hanging around Archway (it's the Archway with Words festival, in case you haven't noticed!) and working…

**Wednesday, I'll be back in Archway for a Spoken Word Night as one of "five outstanding exponents from London's stand up poetry scene"… Phew! That sounds massive. And it is - when you realise they're referring to Tim Wells (the legend who I had the pleasure of performing in Bristol with on Monday), Laurie Bolger (the legend who I had the pleasure of writing poems in a packed takeaway van with on Wimbledon common last Sunday) Salena Godden (the legend whose new book I just got in the post, yay!) and Emily Berry (the legend whose well-thumbed Dear Boy sits on my shelf). I'll certainly enjoy the evening! It should be legendary!

**Thursday, I'll be doing a long feature set - with food! - at Poetry and Poppadoms at Chocolate Factory in Wood Green. It'll have that grab your curry and sit down for a proper feast of words kind of vibe. Hosted by Paul Lyalls, with Jasmine Cooray (am biased here but she's a good friend and a great poet) and Abe Gibson (whose Thatcher poem has stuck with me to this day since I first heard it). 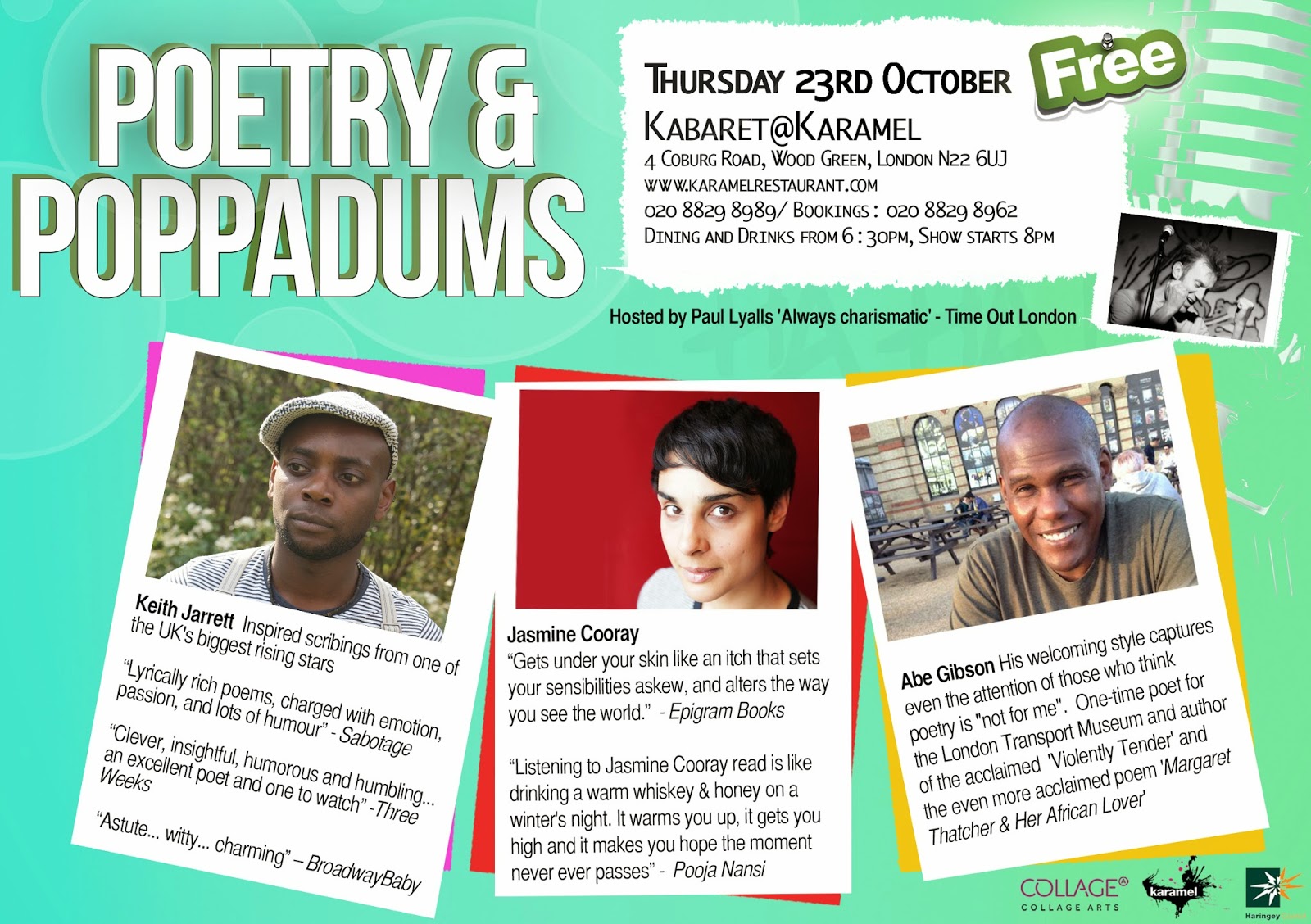 **Friday I won't be around but The Able Seaman and friends will be attending to all your poetry needs at Madam Scarlet's Poetry Speakeasy. It's the first of an ongoing round of secret poetry gigs in an as-yet undisclosed London location. I can't say much more, except that it's been so much fun creating characters with the other poets, and writing character-driven work. Meanwhile, if you come along, expect to hear some entertaining poems from one or all of us, and to have a good time. 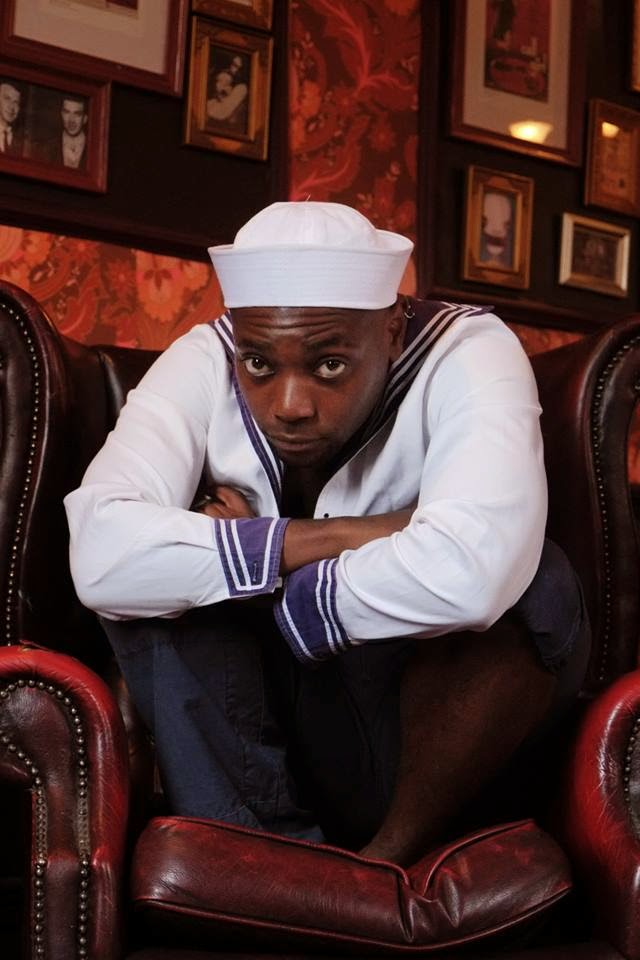 Sunday, I'm planning to stay indoors and pack as I'm moving home the following week!
Posted by thinktank at 16:48 No comments: Links to this post

I'm on my way to Wimbledon. Not for tennis or Wombles but to cook up some poetry as part of the takeaway team for Wimbledon Book Fest. There till 4.30 - come on down!

Posted by thinktank at 10:01 No comments: Links to this post

Back to Black (History Month)

Don't worry, it'll be short(ish) and, hopefully, to the point.

The point is, I think it's important more than ever to appreciate the complex differences in black UK perspectives in relation to US viewpoints, whilst being careful to remain in solidarity with both sides of the pond. The point is, whatever your standpoint on Barbicangate*, more black people here - people who have historically been underrepresented in spheres of power, barred from cultural institutions, political institutions, academic institutions whilst being disproportionately institutionalised - are engaging politically and that can't be a bad thing. The point is, if we take BHM for what it is, celebrating the fact that the Mary Seacole Ward and the Florence Nightingale Ward now sit comfortably in the same hospital with the same number patients (although, trust the Daily Mail to dredge up someone to make Seacole out to be a higgler woman, profiting from war)**, we can now start to ask why is everybody so sick? 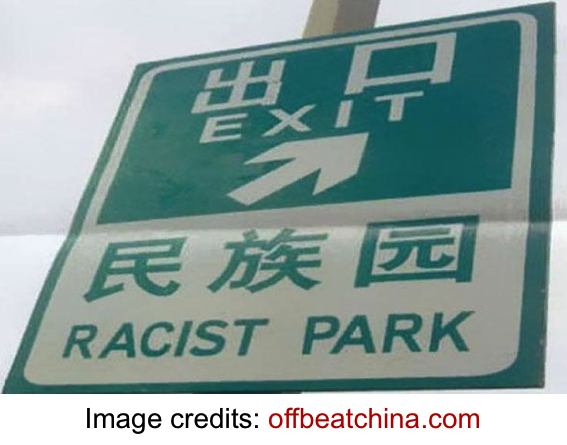 And the point is also that it's difficult to talk about race without the huge spectre of racism casting its shadow, as much as we want to depart from that. ("You know who talks about race? Racists," the angry guy says, without any sense of irony… which Jon Stewart cleverly satirises)

Back to the UK and the point is it is only in the interests of a few to promote the richness of black history and culture and, even among black Brits, concepts of "blackness" and "history" are contested. The only solution is to give voice to as many people as possible. I grew up just as "multi-culturalism" began to make way for "diversity" and I strongly adhere to its principles of not restricting society to just the one narrative. We lose out by only telling 'one story' (I love Chimamanda for her writing, but her TED talk on the danger of a single story is another good reason to love her.) I strongly believe that there is enough space for a wide range of people and views AND for argument. One of my favourite quotes, from Peter McLaren - as quoted by bell hooks - is:

'when we try to make culture an undisturbed space of harmony and agreement where social relations exist within cultural forms of uninterrupted accords we subscribe to a form of social amnesia in which we forget that all knowledge is fogged in histories that are played out in the field of social antagonisms.'***

I felt it for Raven Symoné**** when she got pounced on for stating that she isn't "African-American" (or gay, for that matter, but that part largely went unnoticed); she didn't deny she was black, as she later explained:

“I never said I wasn’t black… I want to make that very clear. I said, I am not African-American. I never expected my personal beliefs and comments to spark such emotion in people. I think it is only positive when we can openly discuss race and being labeled in America".

All well and good and yes, as an outsider, I do find it - how shall we say? - problematic that white people get to be called Americans and black people largely become African Americans (which becomes especially tricky when African immigrants, or black people from the Caribbean with different histories then get brought into the mix), but that isn't my conundrum to solve. So Raven has every right to decide she's not AA. Although stating that she was 'colourless' hit a familiar nerve.

Bear in mind that I created a 50-minute poetry show that was all to do with labels (during which I covered myself in an A-Z of 26 self-adhesive labels, which I removed while deconstructing some of the different ways in which I have been labelled over time, in alphabetical order). Bear in mind that, at the end of the show, after I had explored diversity and race and gender, sexuality, religion… and after the floor was strewn with labels and all sorts of poetic paraphernalia that comes from creating a one-man show, I worked out that only the very privileged can afford not to have a label. I celebrate Raven's colourlessness, and her ability to transcend colour and sexuality, while knowing that I cannot afford the same, and while knowing that transcendence hides discrimination and inequalities and injustice.

I used to find it annoying filling out ethnic monitoring questions on forms - well, in fact, I still do… But, often, the purpose is to monitor and sometimes mitigate against prejudice (and there will always be prejudice in the world, it's natural). If, suddenly, we stop 'seeing' race, any need for people to address under-representation of certain races in certain areas will disappear (I don't think France has resolved this issue, for instance). The same goes for gender, disability, age… We should 'see' race in how we teach literature in schools. 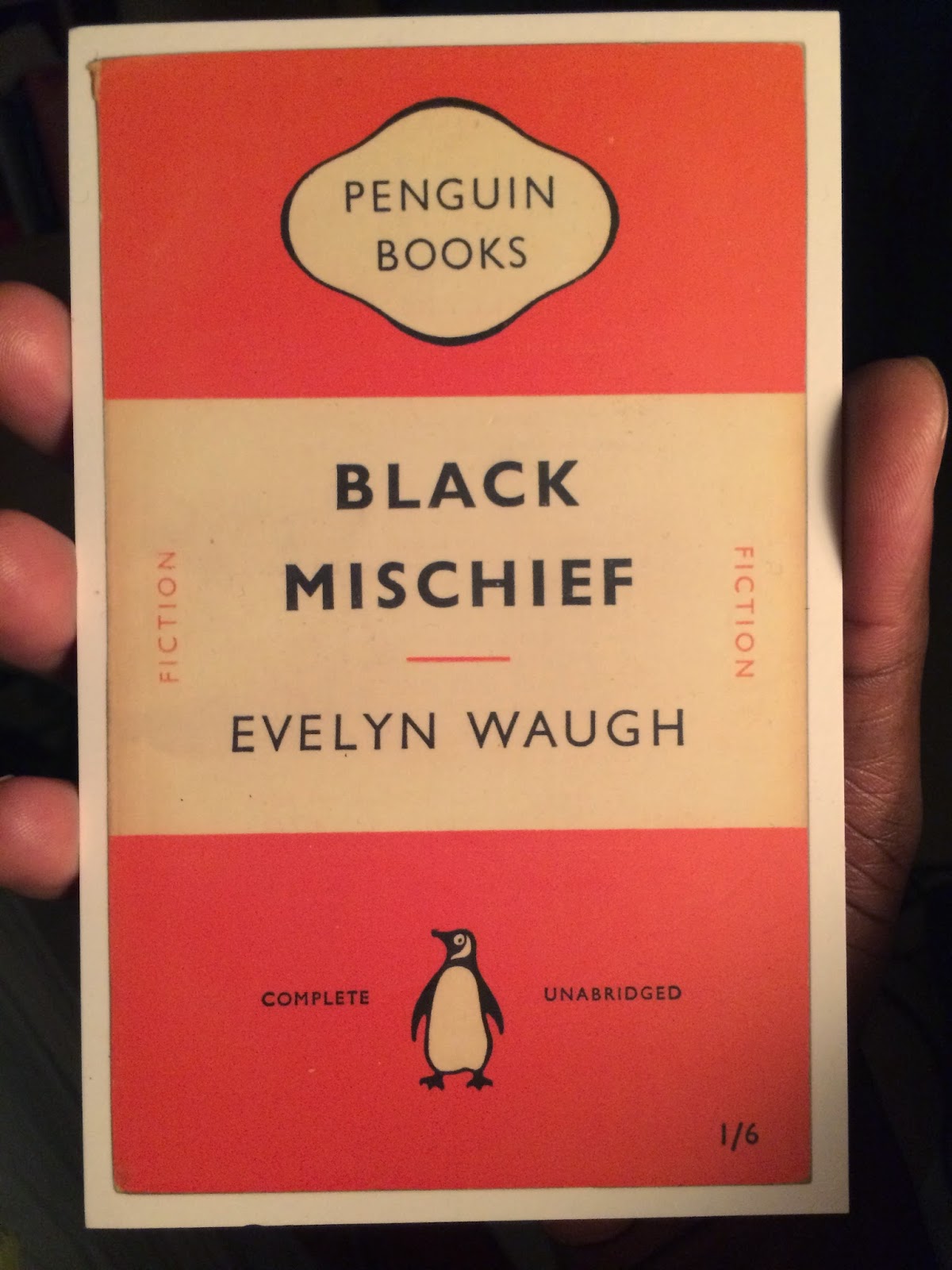 *I really hate when people add 'gate' onto things to signify controversy but I shall do what many have done with other hateful turns of speech and reappropriate it ironically. Having said that, it's kind of tautologous, seeing as the word 'barbican' means gateway, so it's almost like saying gategate or doorgate; it actually makes no sense whatsoever.


**I try not to link to The Daily Mail too much. As much as a lot of their articles sound reasonable enough, they spew far too much hatred - here's a reminder of just some of the highlights.

****Ok, if you don't know who she is, who is you? (I grew up with her - almost literally as we're a similar age - watching The Cosbys to Hangin' With Mr Cooper etc...)
Posted by thinktank at 17:45 No comments: Links to this post

Postcard from Home… Oval (Thought of the day) 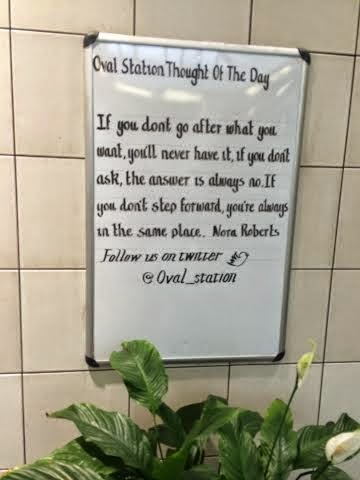 Posted by thinktank at 15:03 No comments: Links to this post 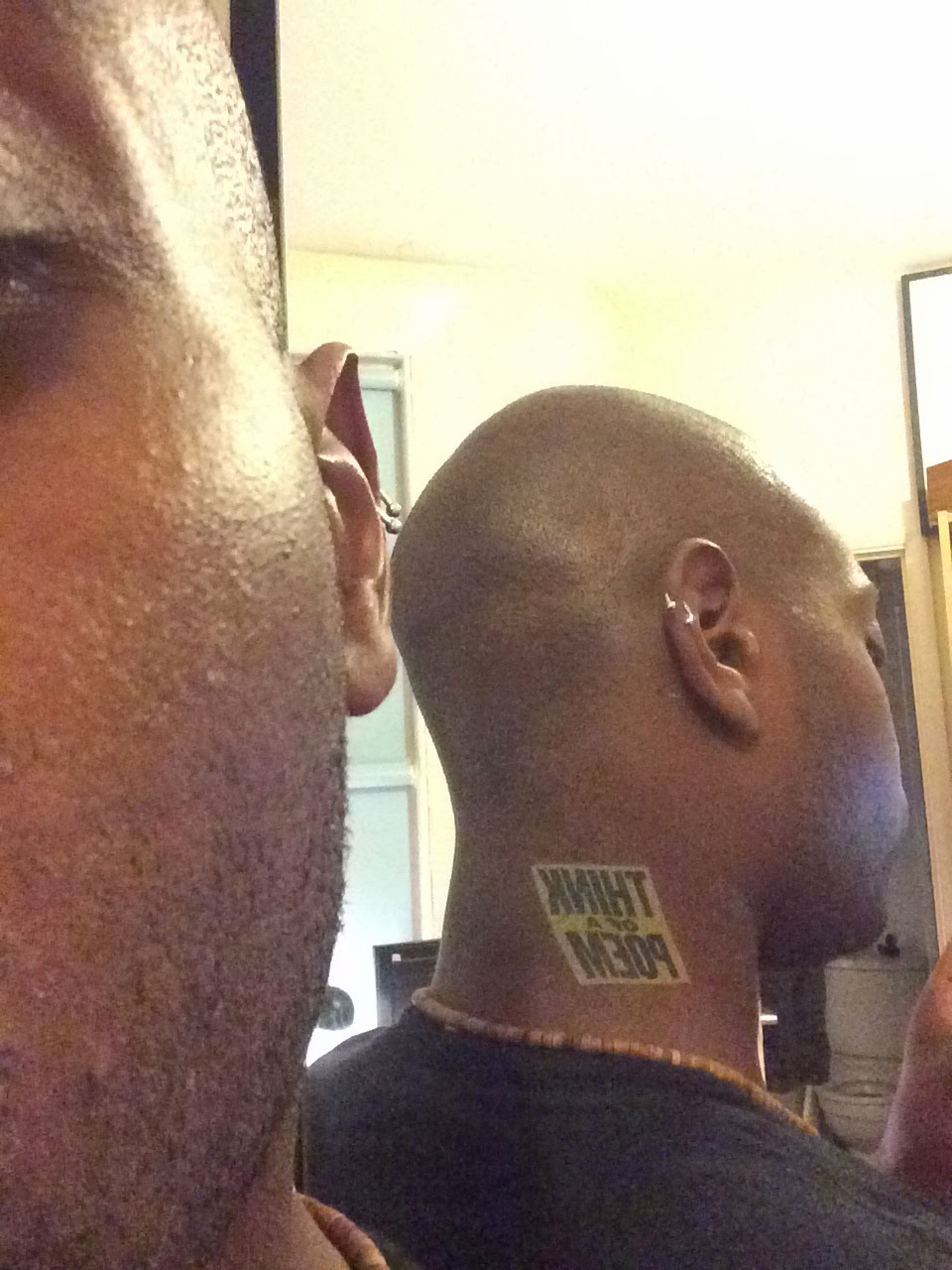 I hate the word 'selfie'... and I hate the fact that I can't leave home for more than half an hour before having to walk around someone taking a picture of themselves with their phone but, nevertheless, here I am, last night, the holiest night of any poet's calendar, managing to take one - with the obligatory toilet in the background - of me and my new neck tattoo. (It didn't come off in the shower this morning, I found out later when someone pointed it out)
Posted by thinktank at 15:09 No comments: Links to this post