So quite a lot's happened in the past few days, and it looks like this could be my last post for a while. I'm off to the airport in a couple of hours and will have limited internet access over the next few weeks until Jan. I'm also leaving Camden for now as I've had to move out. So all that's left to do is find a random word to last me the next few days...

Logging off!
Posted by thinktank at 02:26 No comments: Links to this post

I like that. This could open doors to all sorts of ideas
Posted by thinktank at 17:37 No comments: Links to this post 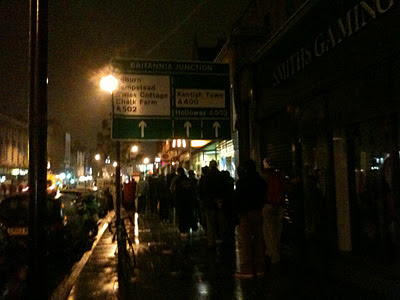 Wish you were here.
Maybe we could drink in the irony
Of these soldiers of the night
Who wrestle not against flesh and blood
But against the dexterity of their own fingers
And infinite boredom
Maybe we could lay dexterous hands on each other
And I could wear the warmth of your skin around my neck
And hope some more
I need not now gulp a goodbye from my throat
Or wheeze another song

Through the overhangs of Monday's spine


I need not now succumb to the promise of soggy chips
Balanced on trembling digits
Because it is possible
That a warrior’s cry lies waiting
To be expelled from lungs
Long since sacrificed to the Smoke
And so, perhaps, I can hold these hands up
Against the Neon-lit streets
Against the tide of idle thoughts
Against the peculiar world
And answer your calls
Maybe you could say it is man’s duty
To tuck these thoughts in
And bite the tongue
And the bullets
And the bit pulling you back
And maybe I should stop wishing
To change the state of play


Me on way home the other day, photo is of a queue at midnight for Call of Duty 3 (the controversial modern warfare video game) ... Random idea in my head now which I've conflated with random idea in my head then... not sure if it works, but I'll play with it tomorrow)
Posted by thinktank at 02:14 1 comment: Links to this post

So tonight is probably going to be one of the last - if not, the actual last - gig I do in London this year before I go off travelling. 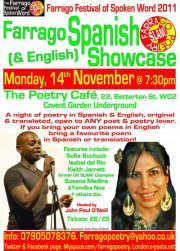 For those of you who don't know - er, probably most people - the first time I ever went to a poetry event, it was a Spanish poetry night. I was kind of coaxed onto the stage and I remember reading out the poem "Walking Around" by Neruda (decent translation here, original here) which is probably still one of my favourite poems. So it's kind of fitting that I end the year poetically where it started several years ago.

I've also just heard Canadian poet Ian Keteku will be performing too, who I last met at the World Cup Slam in France (he won the title - and deserved it!), so there'll definitely be an international flavour to the night. If I have time to translate a more recent poem of mine into Spanish, I will. In any case, expect a mixture of English and Spanish, with a few poets translating both ways.

P.S. This should also be the last time that photo appears on a flyer. I mean, from all of my facebook pics, you'd think I was actually attached to a microphone... I'm not, honest!
Posted by thinktank at 13:52 No comments: Links to this post

Well, it's only a few days - two weeks, actually - until I go travelling for a bit, returning in 2012. I've been trying to resist the urge to bundle 2011 up prematurely and start making all those promises to myself that I did last year (write more, finish the novel, become a better person...) but there's still, like, a tenth of it to go, so who knows what's coming next?

I couldn't help but moan in frustration when I got an e-alert from a writing forum, entitled 'Silly Season approaching' - the silliness in question being the mustachioed men of Movember and the 'I've-always-had-a-book-inside-me' ambitions of NaNoWriMo. Predictably - I rarely see things in black-and-white these days - I have mixed feelings on the latter although, ultimately, if someone can write a decent novel in a month, who am I to judge, simply because I can't do it in a year! Some people need the discipline of a strict time-frame, and I should probably include myself in that category. Having said that, I understand why people react negatively to projects such as this: to the casual observer, it can make writing seem easy, like you can just pick up a pen and out comes this bestseller, as if writing is a hobby on a par with crossword-filling and stamp-collecting. A few hours set aside here and there, and a well-structured, grammatically immaculate 90,000 word gem comes out. Voila!

Anyway, since I last updated, we've had Halloween, Bonfire Night, the seven billionth person on the planet, a resignation from Berlusconi (if he really exists) in addition to signs Europe is on the brink of financial collapse... oh yeah, and more annual poppy controversy (including Royal intervention). With all this in mind, it does feel as if there is a certain silliness in the air, or at least a lot of trivialisation and crassness. And I don't really want to qualify that comment much further, except to say :P

I'm hoping the next week or so goes smoothly, catching up with old friends, wrapping up work projects etc, and I'll continue to update until I head off.

Embracing the "silliness" in the meantime!
Posted by thinktank at 13:44 No comments: Links to this post

(I think I would have preferred 'bus', but you can't pick and choose)
Posted by thinktank at 13:25 No comments: Links to this post