I won't be performing any poetry tonight. In fact I won't be performing at all. Or even judging the slam. My alter ego The Conscious:Ness will be in the judging panel for the entertaining poetry badness that is The Anti-Slam. This time, it's the Apocalypse, which will be coming to Hackney Picturehouse sometime after 7.30 tonight. 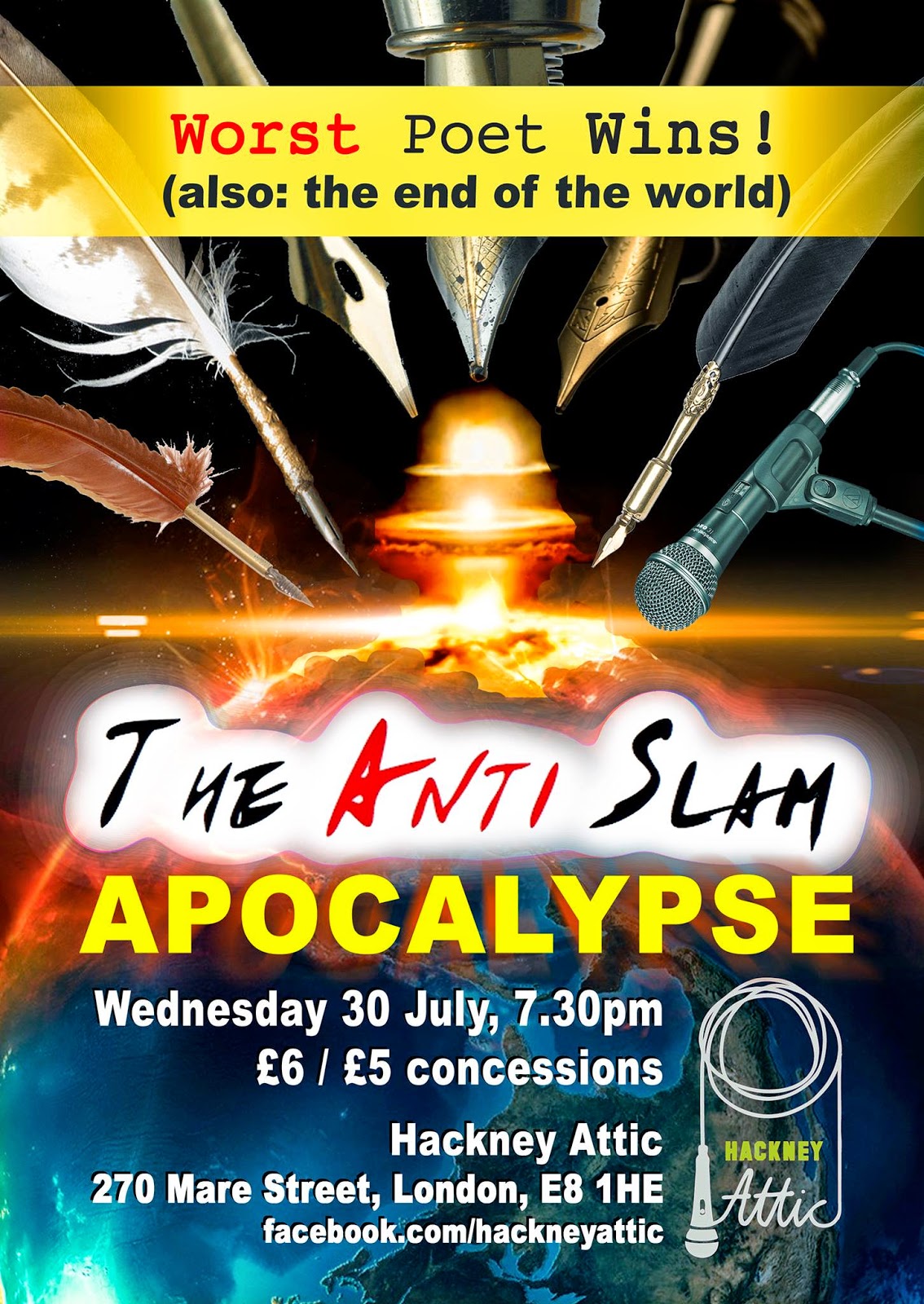 Posted by thinktank at 18:24 No comments: Links to this post

1. Take a photo of most of the books you're going to reference, knowing that you won't read half of them, and you'll probably end up quoting different authors... Don't forget that most of your reading is going to be hard-to-find essays from e-journals, anyway. 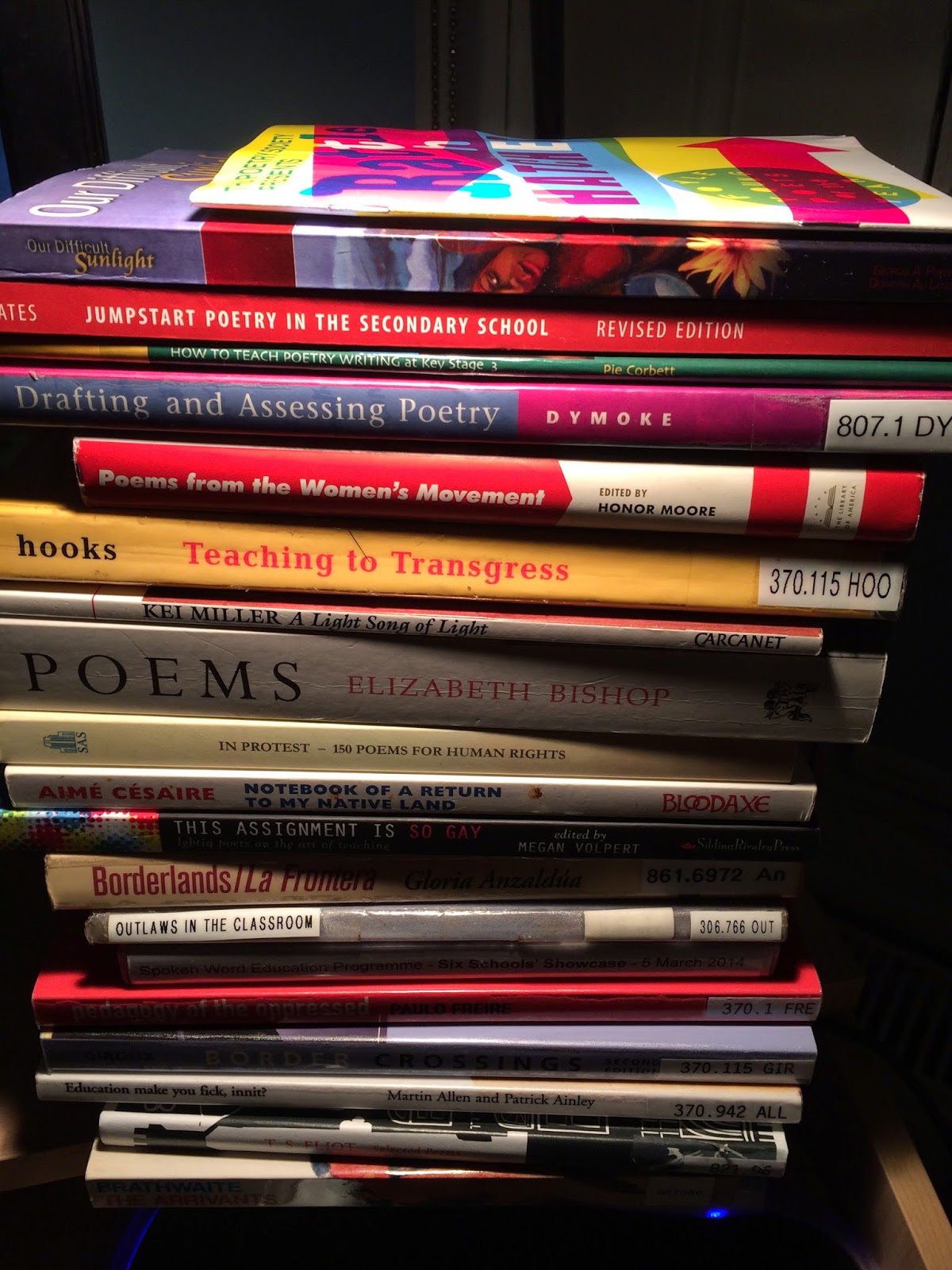 2. Using the tower of books balanced precariously on the edge of your desk, type out a book bibliography, trying not too get distracted into reading bits from each. Try not to laugh when the tower topples and the neighbour downstairs bangs on the ceiling.

3. Realise that you only have 15,000 words. At the rate you're going, that's about 300 words for every book/article you're aiming to reference.

4. Make a mental list of all the films/YouTube clips/articles/exhibitions/books you've encountered in the past few month - they may come in handy. You're going to be writing a lot about divergent thinking and metaphor making, so all anecdotes hold possibilities (including the one about coming into school and spending half the morning crying in your supervisor's office, before teaching one of the best classes ever).

5. Play some more with the title. You're going to talk about mirrors in the introduction... You like wordplay. Why isn't there a suitable academic pun? Google: mirrors.

7. Talk to your friends about it. Listen to them when they suggest you set a deadline and a daily/weekly word count.

7 things I've been forwarded and finally had the time to watch...

In the last month or so, I've had a lot on my plate with the end of the school year and WordCup2014 (which was spectacular, by the way!) I've also managed to start getting some kind of balance with work/social life. Not everything starts and end with poetry/poetry education, no matter what anyone else says. You have me on record :)

I've been forwarded a few video links within the last few weeks by different people, for different reasons. I hadn't followed up on any of them properly until now. Nearly all of these have followed on from conversations. Some of them are pretty uncomfortable, and there are places where I don't necessarily agree with the points of view. But I've now had the chance to see these links, it's interesting where some connect with each other.

So this came from two conversations with a work colleague. We'd been talking gender issues and feminism one time; then another time, when I mentioned the "American Style" of performance poetry she said "I have to show you this link". Period.

There are some gems in there, from, "everybody I love knows how to bleed with me", to "spill your impossible scripture all over the good furniture..." What! Serious.

J Mase III brings me back to Capturing Fire this year, where he performed this poem (I was on the plane back to London the night of the finals and missed it). Overall lovely person and someone I need to email a bit more than I do, this poem uses some of the tropes you may have heard before - and others you may recognise. Having spent some time with him in DC and London, I found it challenging and uncomfortable, in all the best ways poetry is meant to.

I saw the screenings of both films in March (trailer for TAC below) while waiting to rehearse for a show later that evening at the Southbank Centre (talk about maximising my time!). I left before the Q&A but was shaken up by one of the stories in The Abominable Crime and really wanted to see it again when my mind wasn't elsewhere. I mentioned it to a friend about a month ago who emailed me a link to another screening I'd just missed! And then he sent me the Q&A video below.


bell hooks - Are You Still A Slave?

From one form of extreme Oppression, to another with, arguably, a smaller 'o', I was forwarded this link with the excited comment: "This is the one where she calls Beyonce a terrorist!"

A week ago, and I'd just left a talk about sexuality and genetics. One of the women on the panel rubbed me the wrong way and I left angry and vocal about it. A guy who'd also been at the talk came over to where I was noisily spouting my opinion outside and we chatted; the conversation veered onto Chimamanda Ngozi Adichie and Zadie Smith and back to Beyonce. And somehow, this talk came up. He took my email and sent me the link. Now I've had the time, I wound up watching this last night:

Israel/Palestine is a hot issue right now and I've been on a protest outside the Israeli embassy this week. And, of course, when the UN recommends investigating possible war crimes in the latest strike on Gaza, we know not much will come of it.

I've had to avoid certain friends on Twitter/Facebook because of ignorant comments. When we're talking others' lives and mass suffering - on both sides - we need to tread carefully. That said, like one of the chants at the protest: "We are all Palestinians". This simply can't go on.

This wasn't forwarded to me directly, but ended up on my Facebook feed from a writer I admire and respect. So I checked it out, which then led me to the video below it:

When discussing Israel/Palestine, not enough people separate it from Judaism. Agree or not, in this video (below) one group who insist that the Israeli state is, in fact, anti-Jewish share their views. At the protest I went to, I was happy to see a group of Orthodox Jews up on the platform, making the same claim. The more we distance the Jewish religion from Israel (and remember that Palestinians aren't just Muslims, either), the more I think we'll be able to talk about the conflict - and the US/Brit involvement in it - more sensibly.

Before I say any more, I'll have to do my research; I wish more people would do the same.


I guess this will have to be the "and, finally" story. A friend of mine who often sends me links to things on Whatsapp messenger, which I sometimes don't check for ages sent me this. And the girl in pink at the end made me smile (her moves are easier to copy).

Posted by thinktank at 12:03 No comments: Links to this post

Posted by thinktank at 22:48 No comments: Links to this post 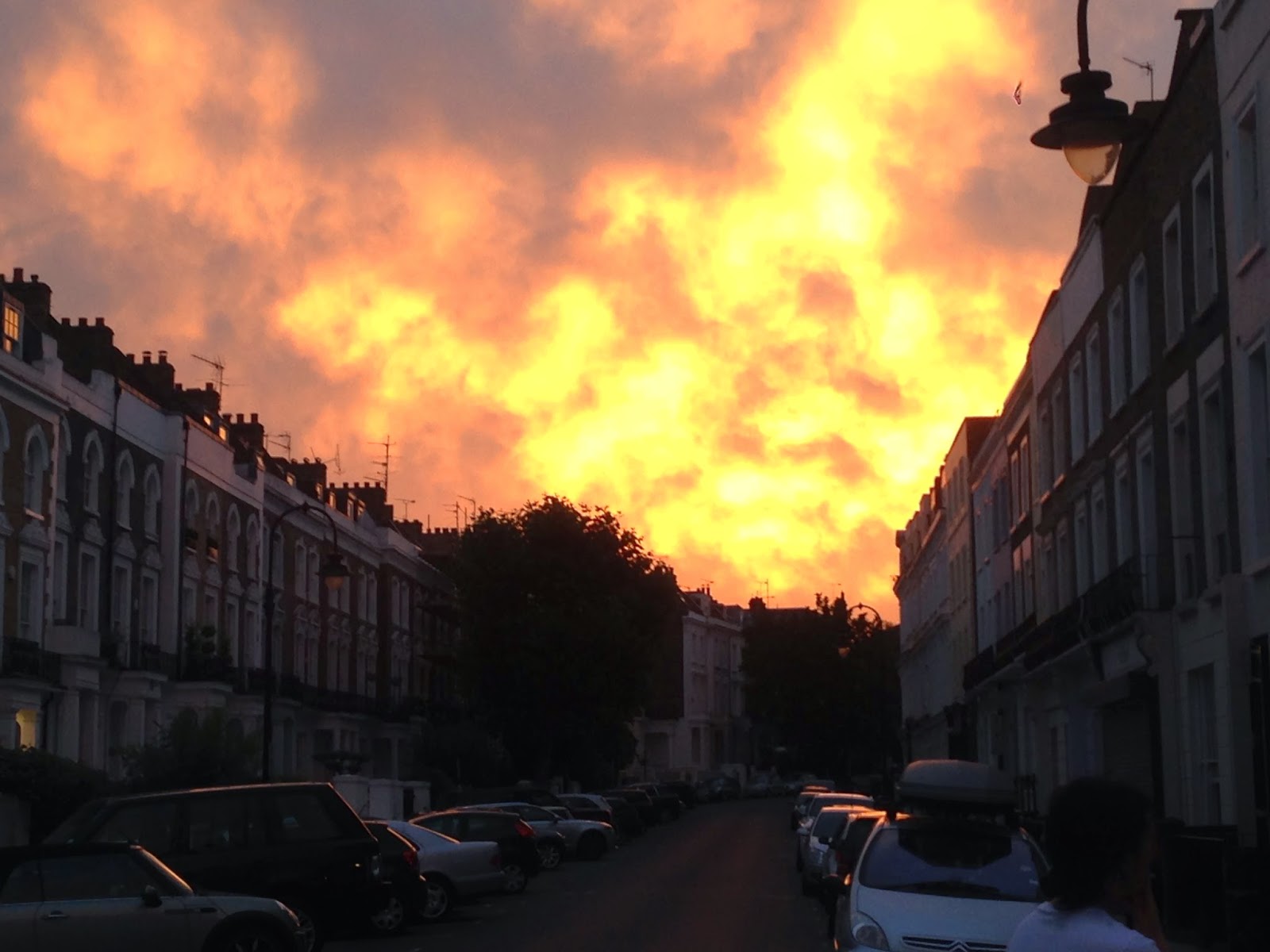 A wish you were here moment, if ever there was one...
Posted by thinktank at 15:59 No comments: Links to this post

On NTS Radio... in just over an hour!

I'll be talking poetry on NTS radio's Re:Versed show with Sam Berkon in just over an hour, 12 noon-1pm. Am on my way to Dalston now, sufficiently coffeed and still recovering from end of term shenanigans.

Also joining will be Paula Varjack, who I'm a little bit in love with, truth be told. We will definitely be covering Anti-Slam Apocalypse (my alter ego The Consciousness will be one of the judges for July 30th's edition), and probably be talking education too, seeing as I'm in the interim between leaving my school teaching placement and finishing my degree. Still wondering what tune to play though. Tune in today or later on here!

Posted by thinktank at 10:58 No comments: Links to this post

Back at the aptly-named Star of Kings, Kings Cross tonight and I'm repping Mercury @ Utter! Space (every time I see the name of the gig written down I wanna sing this song):


I've just about managed to write a bunch of poems and I'll be testing some of them out on all the earthlings present.

As the flyer is quick to point out, there's a stellar line-up of poets performing in this (and I'm quaking in my boots, hoping I get time to tinker with what I have so far)   Particularly looking forward to Amy Mcallister (Venus), James McKay (Uranus) and Musa Okwanga (Earth).

More details here.
Posted by thinktank at 15:46 No comments: Links to this post

A good friend and writer, C.E. Medford, has published her first book, Magic America, just in time for US Independence Day on July 4th. She creates these tightly-written sentences and conjures up the kind of urban magic realism I enjoy using Hope, the narrator, who takes us through this alternate version of 1980s Trenton, New Jersey, where she is coming of age. I'm not quite halfway through yet, as I'm taking my time to enjoy it, but I'll keep you posted.

Happy to know a good community of writers (the Unwriteables, who I've mentioned before) and to see lifelong writing projects take such physical shape. Got my copy in hand and off to continue reading in the park (before it starts raining again)... Will post more tomorrow! 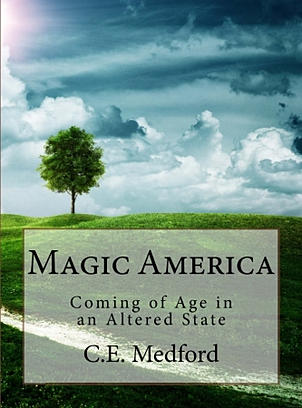 Posted by thinktank at 12:45 No comments: Links to this post

Summer is at its fullest. I enjoyed taking a long stroll at lunchtime and catching the heat of the sun earlier. It was delicious. I also had to brush up on my Shakespeare knowledge, as it looks like I'll be devising a few Shakespearian sonnet-writing workshops over the next few weeks; I thought I ought to write some myself.

I stumbled across this one by plucking a number from the air:


Thus is his cheek the map of days outworn,When beauty liv'd and died as flowers do now,Before the bastard signs of fair were borne,Or durst inhabit on a living brow;Before the golden tresses of the dead,The right of sepulchres, were shorn away,To live a second life on second head;Ere beauty's dead fleece made another gay.In him those holy antique hours are seen,Without all ornament, itself and true,Making no summer of another's green,Robbing no old to dress his beauty new;   And him as for a map doth Nature store,   To show false Art what beauty was of yore.

I showed this sonnet to a class of twelve year old children. Once the stumbling block of antiquated language is removed, there are quite a few remarkable things to discuss; there are issues which may chime with our present-day realities. Perhaps the idea of stealing hair from the dead is unappealing now, but try watching the documentary Good Hair without concluding that some of our own practices are not equally absurd; cosmetic extremes are by no means a new thing.

I can't be specific about the time or the place but I can't get this image out of my head - a line of mostly black children waiting to be let into a school building on a hot summer's day, similar to the one we've just had. Some of them are using books/ the shades of each other's backs/ their jackets/ their bags to cover up the skin on their arms and faces, and I overhear one or two of them explain that if they stay much longer in the sun, they're going to get too "blick". I don't have time to challenge them.

But, if I did, I hope I'd get the chance to show them this video, by Indigo Williams, about colour prejudice.
It's a strange and difficult issue to deal with in a multicultural setting, but I want to see if I am able to devise a few workshops that do challenge the status quo, even if they're a little uncomfortable to deal with.

Posted by thinktank at 02:38 No comments: Links to this post