All this week, thirteen poets (including me) will be popping up across the tube network, delivering poetry and smiles to unsuspecting commuters. Some of us are Poets-in-Residence at selected stations, with a not-so-fleeting posting, writing poems and interacting with passengers, and spreading some of that poetry joy. The rest of us will be at stations for usually no more than thirty minutes at a time.

I'll link to some of the other poets as the week goes on, but in the meanwhile, Travel Better London's Tumblr can be found here, and there will be tweets and competitions happening all over the shop over the next few days, so stay posted! 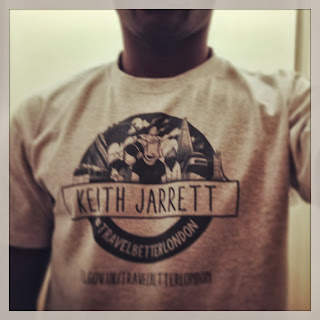 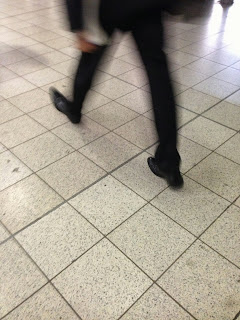 I then headed off to three stations, including Paddington, where I performed a couple of poems and scribbled notes... One of the notes to develop:

6pm: Restless heels clack out
towards the mouth of the Great Bear
London burps its workers Westwards

Tonight at 8pm, in the Archway Tavern, I'll be at the Hammer & Tongue poetry slam as part of the Archway with Words Festival. Hosted by Sam Berkson and with featured poet Polarbear, it's going to be a wicked start to the weekend. More updates to come.

Posted by thinktank at 16:01 No comments: Links to this post 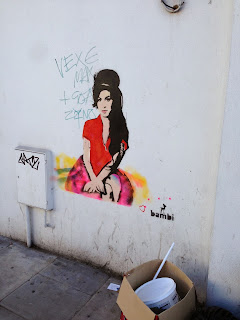 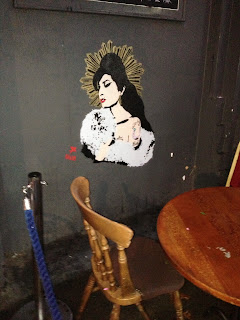 Our lady of Camden/ skirting walls/ peeling round corners/ a tag outside a bar/ say her name three times and she will claim the night back for you/ canal water/ a lock and a chain pub/ a diaspora of glass crunching
under
your feet/ bolt cutters have broken bike chain/ like the first morning/ it's gone/ fist connects/ phone disconnected/ disco music from the retro place/ I love the 90s/ still haunted by Empty/ and Come on den, yeah!/ too shook up to step up/ too proud to step down/ sent message for back up/

in retrospect, could have bolted/ but back at bus stop/ sticker scratched halfway off/ a number/ 27 or
under
the bridge/ another mattress/ in spring/ just one small rest - blanket/ would be a good name for my/ don't call me your/ missed call/ three times/ hold your key behind your back/ turn the lock/ do not let them in.

Posted by thinktank at 11:13 No comments: Links to this post 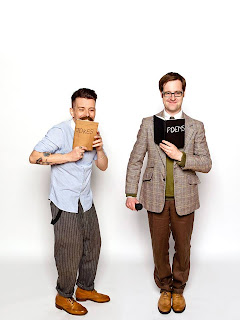 The time has come to Stand Up and Slam! At 7.45, I'll be taking to the Comedy Cafe Theatre in Shoreditch as part of a team of poets, led by Dan Simpson. We'll be destroying the opposing team of stand up comedians in a battle of words and power. Who wins - jokes or poems? The audiences decides! It's gonna be a laugh going to be a very deep and moving triumph of poetic wordplay and emotion over the frivolous pursuit of cheap laughs :P

Posted by thinktank at 00:41 No comments: Links to this post 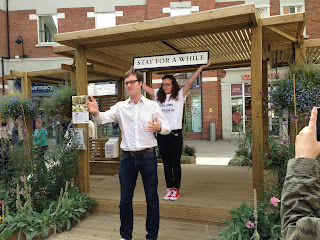 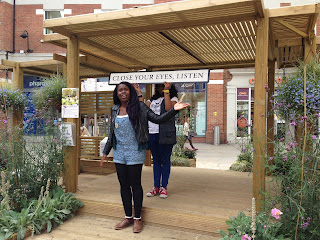 I spent yesterday with five awesome poets in Canterbury for the Wise Words Festival doing pop-up poetry performances. The weather was a bit... problematic, and in between showers, we ended up in cafes reading to receptive (and, mostly, dry) audiences at their tables.

High on camaraderie and caffeine, somewhere in our conversations, Grazia magazine's article on 'emotional cellulite' came up (as discussed on this blog) and it sounded too much like a joke for me not to write about it. I'm sure either Vanessa Kisuule or Emma Jones will write proper poems on this. In the meanwhile, I set myself the challenge of drafting my own response to this nonsense while walking down the old streets of Canterbury, and read it out on the spot. I may come back to this and redraft it, but it was a lot of fun doing a quick free write and throwing it out onto the streets immediately. 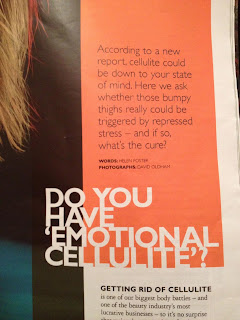 Do you suffer from emotional cellulite?
Are your chakras lopsided or incorrectly aligned?
Is you spirituality sagging?
Is your third eye wrinkled?
Are you baggy around your relationship line?

Do you need to grab a handle on love?
And are your love handles forming
a barrier to your creative success?
Do you feel excessively hopeless?

When did you last detox from your anxiety?
Are you dieting on a widening variety
of self-help guides, celebrity-focused gossip
columns and gloss over your shoulder magazines?

Do you feel bloated?


Do you feel wanted?
Do you feel haunted?
Are you exercising your demons regularly?
Or are you dragging your ambitions
through the treadmill of bottom-shelf mediocrity?

Are you bored?
Are you broke?
Are you psychocynically bankrupt?
Are your hollow?
Or is your mind wallowing
fat with greedy thoughts
that only liposuctive remedies can erase? 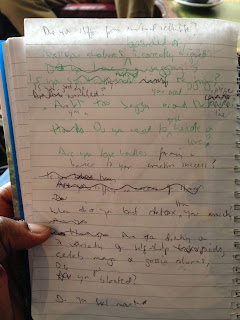 Are there red circles on your self-image
that need to be diminished?
Are you a half-finished product
of your own disappointment?

Are you lost?
Are you winning?
Are you thinning out?

Are your prospects slim enough
to slip into superficial tedium?
And now you can fit into that medium-sized red dress
have you been left with the scars
of emotional cellulite?

Are you sufficiently stretching
your chakras?
Are they inverted or incorrectly aligned...?

Posted by thinktank at 23:58 No comments: Links to this post

My week so far in images... 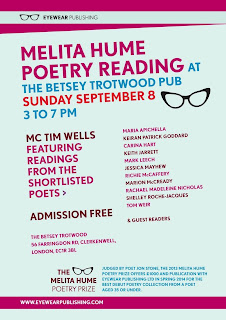 A great way to spend the afternoon - listening to poets from all over this "small island" who have great things to say, in surprisingly different ways. After my great joy at being shortlisted in the first place, I was disappointed not to have gained first place when the winner was announced on Wednesday, but I'm excited that there are so many new voices out there, and it's given me a challenge to write more and write better.

Was a fabulous night!

Spent my non-teaching time at my new school's library looking through their (pretty impressive) collection of poetry and I discovered this, a poetic, illustrated biography of the Cuban poet Juan Francisco Manzano: 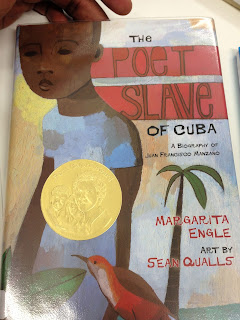 Went to Polari and heard Bernadine Evaristo read extracts from this (just got a copy): 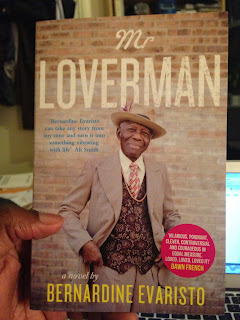 At the end of a second week of teaching, I came home and read. My new love of graphic novels and a wonderful librarian led me to this: 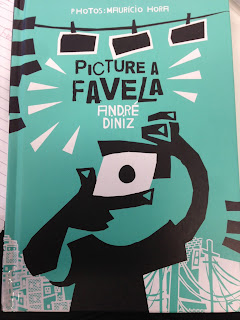 Caught up on the news and finished watching the BBC documentary about teenage exorcists... Funny how the same footage can be used to create two very different versions (see below). I'll suspend my opinions till next time.

This afternoon, my aim was to write, but admin - and exhaustion - got in the way... Most of that now out of the way, I can spend tomorrow catching up!

Posted by thinktank at 22:13 No comments: Links to this post

I've mentioned the Melita Hume Prize previously, and I'm really pleased to be joining the other shortlisted poets in the prize shortlist reading at the cosy Betsey Trotwood in Farringdon at 3pm. Yes, that's right. 3pm. Come along! Grab some lunch or just feast on some great poetry.

More on the shortlist here. It would seem that I'm up against some very talented writers with a huge range in styles and influences. I'm looking forward to putting verses to names and finding out who gets chosen for the prize (fingers crossed!).


Tomorrow (Monday), I'll be in my home turf Hammer & Tongue Camden, where I'll be featuring alongside Sophia Walker, who I already thought was fantastic, but now loads of people who went to Edinburgh agree with me, including the BBC slam judges! I'll add links for this later.
Posted by thinktank at 01:14 No comments: Links to this post

It seems Hackney's where it's at!

After my welcome to Hackneyhood this morning, I get to go East again to teach tomorrow, and then in the evening I'll be featuring at Hammer & Tongue's Hackney Slam with Sam Berkson, at the Dalston Victoria. Hosts are Stephanie Dogfoot and fellow Hackney Spoken Word Educator Raymond Antrobus. 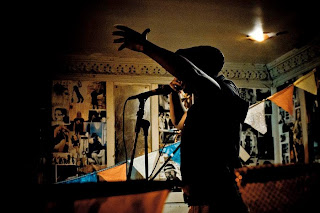 Posted by thinktank at 23:24 No comments: Links to this post

I had my first day at school today, which consisted of inductions, planning meetings and policy outlines... oh yeah, and taking a photo for my ID card and having my head come up looking super shiny!

I feel very much welcomed and ready to begin teaching Spoken Word to my new classes; there's a lot of new information to take in and I'll have to bear this in mind when I'm next baffled by my pupils during the last class of the day, if they don't seem to grasp everything immediately. They have to take in new information day in, day out; I mostly rejig my own templates, re-interpret concepts and spend the rest of the time questioning things, re-arranging lines/paragraphs, deleting cliches and deciding on the mot juste  right word.

I realise I've been anxious about starting school; it's a massive step into the unknown, right? And after the wildness of the summer - travelling, gigging, Edinburgh, late nights and later mornings included - it's about adjusting to new responsibilities and different priorities.

Anxiety can be a mysterious and powerful force (as I learnt here in Harry Giles' very insightful blog post). For one, it makes me more vulnerable to things: the dodgy, undercooked sausage two weeks ago - fine; the hamburger last weekend - still getting over it (yep, really). An average of four hours of sleep a day in Edinburgh - fine; eight hours last night - not nearly enough. But I'm learning to recognise it for what it is and work with it. I also know it's helped me empathise with other people who are finding day-to-day tasks challenging. So it's not a bad thing. It just means there's a lot going on and I need to focus.

I'm hoping that over the next few weeks I'll find really effective ways to memorise names and room numbers; I also hope I'll have some good first lessons and some even better poems come out of the classes. It's all unspoken - till now, ha ha! - but all the Spoken Word Educators want our pupils to be the best! And if it comes down to a Slam, I'd love to say that the pupils I'm teaching are the most talented bunch. But most of all, I really hope it's a useful tool so that poetry is a form they can use to articulate their emotions - including their anxieties - and that they'll be more engaged people for it. And that's what it all boils down to.


Posted by thinktank at 23:03 No comments: Links to this post