So I spent most of the weekend walking around London, bumping into poets in an out-of-context way, soaking in the sun, and hitting the beach ;) 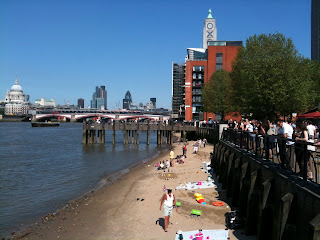 Back to writing today after some research yesterday and hoping to get some serious word numbers out, (even though it's not a numbers game, people).

I've also dropped the whole anti-Jubilee stance, mostly because I won't be here on the Sunday, so the rest of London can deal with it until I get back.

Instead, I'll be here (my name's written down as "Plus Many More..." under the Spoken Word & Comedy section):

It's great to see Spoken Word included a lot more in festivals - and performing at gigs is the only way you can get me in a tent these days! It's also good to see such a hot line-up, on what will hopefully be a warm day.

Working on the novel today but also have a few notes here that should soon become a poem or two.

In the meanwhile, expect more posts later...
Posted by thinktank at 11:31 No comments: Links to this post

I still feel quite uplifted after Sage & Time on Weds. The night was stacked with raw emotion - from one woman and her unfortunate experience with her ex to time travel, split personalities and death, it could have been pretty depressing - but it ended up being warm, daring and funny. It's the first time I've done a full set this month as, unfortunately, things have been busy, but it was good to be there and to mix some new with the old. I'm hoping to be writing and performing more of the new soon.

Tonight I'll again be featuring late at Farrago's Exam Blues Slam! It's their 20th anniversary and, as the oldest Slam! event going in the UK, they've had some real gems up on the stage over the years. I was thinking of going dressed as a 90s dude but my Kid'N'Play-style hi-top just ain't growing :( 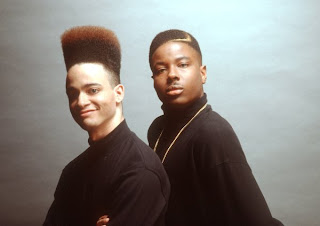 Next week, I'll be going off to Meadowlands Festival, as part of the Bang Said the Gun line-up. If the weather manages to stay like this, I'll be crazily happy!

We'll also be getting closer to the National Team Poetry Slam Final taking place at the end of June and I'm part of the team representing London, coached by poet and actor/writer Katie Bonna. Let's just say Bath, Bristol, Birmingham and Cardiff better watch out! If you've heard either Emma Jones or Sh'maya perform, you'll know why. Poetically, the three of us are very different so it's great fun working with them on our group piece - we all have different styles and ways of writing so it's also already proving to be a good learning experience.

Other writing at home is slower as this sort-of Haiku demonstrates:

So I'm in the library hiding out from builders at the moment, in the hope that things will be quieter next week.

More updates to come!
Posted by thinktank at 13:38 No comments: Links to this post

Once again, it's been a long time since my last post. Things have been extraordinary, on an unprecedented level. I've also been moving around London and working intermittently; and I've given myself the impossible task of trying to connect two voices in one novel - and, to make things harder, the second voice is written in verse.

A couple of weeks ago, I was going to write something about the local elections. But I gave up, knowing that Boris would win again anyway, and he did. We only get what we deserve, and it was essentially a choice between two larger-than-life egos who both ought to know when to think before speaking, but invariably choose not to. So instead, I've been alternating between kissing my teeth, dusting off my shoes and tuning out of the whole thing altogether.

Indeed, all that's left to do is appreciate the last few days before the Jubilympics gets into full flow and travelling around London goes from being a moderately bearable nightmare to a living hell.


The opening para of Owen Jones' guest blog on the UK Uncut site kind of encapsulates my feeling about this one: to celebrate Britishness, out come the flags and the monarchy - and then yet more flags - and everyone's expected to be happy or, dare I say, jubilant about the whole thing. For one, do these things really represent what it is to be British? And, if so, what does it say about this country? There's an unquestioning imbecility about the Jubilee and the Olympics (or, if you prefer, the parody-term "Jubilympics") which bring about adverts like this one, which I spotted on the tube:

"You know when your mum's coming round to your flat and you give the place a quick tidy? Well that's exactly what we're doing. Except our 'flat' is London and our 'mum' is the rest of the world coming round."

There's something in my neck that twitches when I see stuff like that. Or this:

I've been lucky enough to sit back in a few audiences over the past few weeks, and hope to be delivering some new material over weeks to come. Expect another update on that front tomorrow (I promise!)

Word count today so far: 300.
Not great, but the sun - finally we have sun!! - is proving to be a bit of a distraction. I'll have to return to the novel after dusk.

Posted by thinktank at 17:00 No comments: Links to this post

(Just as well... latest feedback from the chapter I'm working on: "rich in imagery")
Posted by thinktank at 14:55 No comments: Links to this post