This is set to be the last ever edition of Jazz Verse Jukebox, upstairs at Ronnie Scott's. There's a stellar line-up and I'm particularly looking forward to seeing the Barbican Young Poets doing their thing. Am excited!

P.s. come early as it's set to be crowded!
Posted by thinktank at 12:37 No comments: Links to this post

Lunar Poetry Podcast Interview... and what we didn't discuss


This is what happens on a mellow Friday morning, being interviewed by David Turner for Lunar Poetry Podcast:

We talk art, influences, fiction vs.  poetry, why I struggle with trap music, education and more... We don't talk about unicorns, dragons, the EU vote or the US election, thank goodness. We also don't get to elaborate on why I suddenly draw a blank when thinking about my influences, nor why I chose the poems I did...

But that's what blogs are for, right?

I read out three poems:

I knew beforehand that we'd be chatting about education so I decided two of the three poems - the first and last - should be work I'd written in schools for pupils, as part of themed workshops. As you might imagine, one of the workshops was about names - where I've had pupils dissect their names for the purpose of poetry writing; the other workshop was an exercise in writing lists, something I adapted from an exercise in Cliff Yates' Jumpstart Poetry in the Secondary School.

On a second listen of the podcast, the middle poem probably sounds the most random. I would have read out a longer poem, Hip Hop Salvation, but it's an energetic performance piece and it was a chilled morning with birds tweeting outside. So, instead, I chose to read its follow-up poem, 'Whom Shall I Fear?' which I wrote as a tongue-in-cheek response to questions about religion I've had from audiences who've heard the former piece.

Finally, all 3 are in my poetry pamphlet I Speak Home. And it's a neat way of plugging the book, something I didn't do but I can do here :)

[There's a BUY NOW link at the top of this blog, just in case you were wondering...]

Secondly, why did I draw a blank when asked about my influences?

What you can't see in the podcast is the moment when I point towards my bookshelf and shrug my shoulders. (Also, I'm too lazy to process a picture of my bookcase now). But I was trying to crane my neck towards it and find the key to my writing. What are your influences? It's one of those questions you're always meant to have an answer for, however dishonest.

I mentioned Kei Miller, because his books appears on my poetry shelves, my fiction shelf and non-fiction too... I also mention Danez Smith because I'd just loaned his beautifully-crafted collection [Insert Boy] to a friend the day before.

I didn't mention Gabriel Garcia Lorca, Pablo Neruda, Alejandra Pizarnik or Cesar Vallejo - poets I studied at undergrad level, which got me interested in poetry again*

...Nor Elizabeth Bishop - who got me through my last degree. ...Nor Gwendolyn Brooks, nor Terrance Hayes, who has single-handedly sparked a craze around a new poetic form - one I've written in several times.

I didn't mention Gloria Anzaldua, or Audre Lorde, or James Baldwin, solid US poets who weren't afraid to be political. Nor some of the London poets I know who've been a more personal influence on my writing, such as Jack Underwood, James McKay, Malika Booker, Warsan Shire, etc. etc. (Btw, I've told none of them this). The list could go on.

Next time I'm asked that question, I won't mention any of those people :) I'll stutter and delve into my memory bank and pick out even more names... or I'll avoid the question. Or I'll say what I think I'm meant to say. Or I'll write another essay and do it justice.

*Related question - I read these in Spanish but why doesn't poetry in translation get more kudos? English-language only is a dangerous prison/prism to see the world through


Posted by thinktank at 08:59 No comments: Links to this post

The Last 2 Weeks in Books: statistical break down 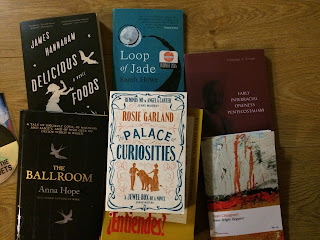 
Posted by thinktank at 22:46 No comments: Links to this post