Postcard from Home... This is a photo 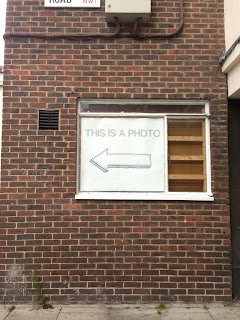 This is a poem.
One metaphor short of a nobel prize
A brick wall to hit your unsophisticated head against
An arrow darting across a souvenir t-shirt: I'm with stupid
One brow so high it tickles the feet of angels, who snort mirthfully through clenched noses
Dense has a double-meaning these days, and you're one of them
And this poem's the other; unpack it like a Friday night punch
At your own expense, or your own leisure or your own
Risk falling through the unspoken
Words.
Posted by thinktank at 20:00 No comments: Links to this post

Travel Better London... It's a wrap!

Last week was whacky and wonderful. I realised my dream of performing an altered version of my (now nearly eight years old) Circle Line poem at an actual Circle Line station. I know - some other people dream of climbing mountains, or playing football in a muddy field for lots of money, or actually changing the world, but there you have it, it was indeed an ambition of mine.

The week wasn't quite what I expected. I've done street performances from Edinburgh to Canterbury and I'm getting more confident in dealing with an unsuspecting public, but I still found this more terrifying than I'd imagined. Rush hour crowds in single-minded got-to-get-home mode are a force to be reckoned with. But some people did stop. And some people said hearing poetry on the tube brightened up their days. And some people shared their poems, their life stories and (lingering) hugs with me. And that was also appreciated.

Getting hold of the service update information board Tuesday onwards really helped. I composed a few quick short verses/ditties on the spot and found I'm really out of practice. But it's a good way to engage with the public in a non-threatening way. When I noticed some students from Imperial Uni, for instance, writing a quick (pun-heavy) few lines about the freshers' boat party started some good conversations. And it got me some requests too... 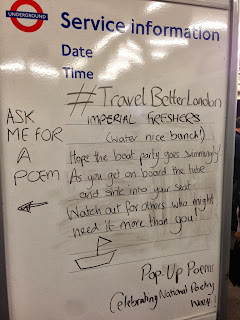 Highlights of the week included teaming up with Emma Jones Tues/Weds and Amy McAllister on Thursday. And learning that tube staff really do put up with a lot of bad behaviour, including one passenger who decided to urinate in front of the barriers at Angel one evening, 'to prove a point'. Yeah, nice point! 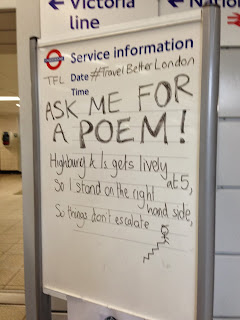 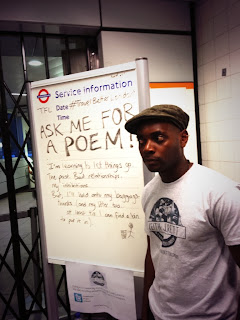 There was the didactic element of encouraging good behaviour on the tube and, in some ways, I felt like more of a schoolteacher there than I do at school! Fitting your creativity around that limited brief can be challenging. But there was plenty of opportunity for fun and frolics and subversion, and I got to write and perform other non-travel-related poetry.


On Friday, Dan Simpson organised a slam competition at Liverpool Street station during lunchtime. Having passed through there countless times, I'd never in my wildest dreams have envisioned it as the place for a slam competition. But, there you go! This city has a way of opening itself up to unusual opportunities.

I'll add some of my other fave highlights later - most of which have been posted onto the official website. In the meanwhile, an extract from my last Service Update poem... 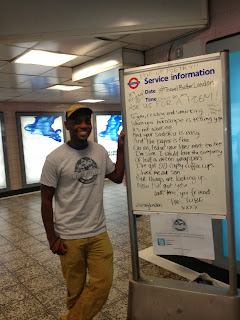 Posted by thinktank at 07:56 No comments: Links to this post 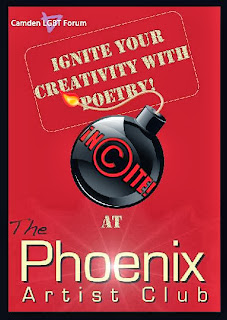 Wednesday, and I'll be joining Danni Antagonist for Incite Poetry evening at the Phoenix Artist Club, a pretty cool venue hidden just under the Phoenix Theatre, near Leicester Square. I'll be performing some old favourites and some new - as of yet unheard - stuff. I'll keep you posted on what I'm writing now later on in the week.

It'll start 7pm prompt as live jazz begins at 9pm. The night's warm and welcoming, and there's an open mic too. Hosted by Camden's LGBT Forum and Trudy Howson, whose live personality will brighten up the mid-week blues! It'd be great to see some friendly faces ;) so come along.

Posted by thinktank at 21:45 No comments: Links to this post