I haven't posted on here for a while; that much is obvious from checking the post history, although the drafts section tells a different story.

I started a few in-depth posts sometime in the Autumn, after the long, angry summer; I attempted to write about Grenfell and Rashan Charles and found I was too bereft of words to convey my hard-to-define hurt, impotence, even. I took to Twitter instead and encountered hatred and ignorance, scrolling all my way to the bottom of each thread, searching for reason and finding more confirmation that anonymity breeds the worst kind of evil, releases all the prejudices kept locked up behind kind smiles. I took to long walks instead, rediscovering the small parks and gardens - some of them repurposed graveyards - hiding behind the relentless pace of the city. I also spent more time with friends and family, on the days when it's been too hard to focus on my PhD. 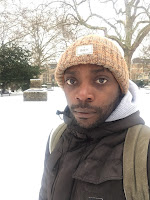 These moments of withdrawal haven't come without their own cost: over the last few months, I've been accused of shoplifting (cheers, Holland & Barrett!); asked by concierges - when visiting friends for dinner - if I'm here to deliver food (cheers, gentrified Docklands!); experienced several of the eye-rolling moments that come from being deemed out of place. And I find myself getting increasingly tired of them, not because they occur but because they do with such predictability. And because to retell them elicits predictable responses, from minimisation to the even more unfortunate familiarity; I'm not alone in this.

Meanwhile, the days are getting longer again, and it's getting easier to give up my evenings to reading. My bookshelf has been straining under the weight of so many new ideas. I need new bookshelves. I also need to keep up with the pace of my book purchasing, and with my library fines. I'm jumping from essay to memoir to poetry to fiction to experimental, stream-of-consciousness mish mashes. It makes me excited for my own work, and terrified. I'm writing what is basically a novel, and I'm not sure I believe in the novel as a form anymore.*

In the coming weeks, if and when I come back to the blog, I'll write more about my progress with my writing.

*that's not quite the full story...

Maybe I've chosen today to post is because it's the first working day since the end of the first round of UCU strikes. Below is a video explaining the action:

It's the first time in over a week that I've been able to work in the office at university without crossing the picket line, and I need this space to write, away from laundry and unmade beds and paper work and March road drilling outside (we all know, as the tax year ends, the holes in the budget are always filled up with tarmac).

I have grudging but full support for the strike; it's important and necessary and I know of lecturers whose pensions have been cut in half by the decision to take away the benefits they'd been promised. But it's about more than pensions. The whole university system in the UK has had a destabilising overhaul in recent years, and it's not working for many people at all. (There is context for my sweeping claim here and here and here and elsewhere. And there is more recent commentary, linking up some of the dots for students.) Given this, I find it hard to even think about pensions when many employees of universities - including myself - are on precarious contracts that don't even offer any reasonable security while working, let alone upon retirement.

Striking is the last legally-sanctioned recourse of the injured worker. It's easy to rail against rail strikes (especially as train driver wages seem pretty healthy) or try to outlaw NHS strikes (under the pretext that it's dangerous to threaten key services), but without questioning why hundreds or thousands of workers are prepared to walk out, people who generally love their jobs, their vocations.

I hope a deal is reached on this particular issue, so I don't have to look up what day of the week it is before I can go into the library, or even open my university email and respond to the few students I teach. But this is by no means the end; a myriad of issues underneath it are surfacing and the UK needs to decide what it wants for the future of higher education. And, for that matter, it needs to decide on its identity beyond the academy, too. It feels like a spiritual crisis. 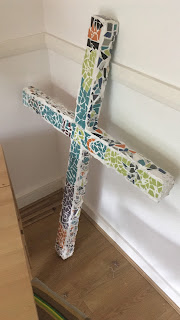 But I don't want to write about politics. Or religion, or spiritual crises. I want to write about walking through old graveyards and parks and local history. But whatever I do, those same old themes come back to haunt me, so I find myself picking at them. I also find humour in the picking; if I can no longer laugh, I may as well already be dead.

With that in mind, during a rare drunken moment, I rescued a surprisingly heavy mosaic cross from a skip and carried it home. I regretted it the morning after, taking up space in my room, bulky and awkward and odd.

After the regret - and my hesitation at being seen carrying it back down three flights of stairs and across two roads into another skip - it also started the seed of an idea for a poetry show.

As fortune would have it, I've been approached about a spoken word show for the Last Word Festival in June. Not one for ambitious projects(!), it will be partly in Spanish. I can't give too much detail at this point - it's a work in progress - but the blurb can be found here.

Before then, I have a PhD to keep working on, plus a seminar to plan, plus a gig this evening which I've organised with a colleague, plus more impracticalities to navigate. 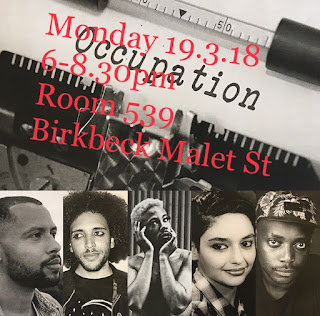 Occupation! is an experimental, one-off event, but if it goes well, there might be others. Some more details on Eventbrite here. 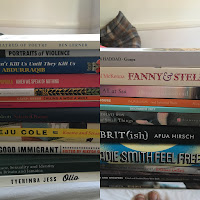 I've just ordered some more copies of my book Selah; feel free to message and request a copy!

I have other deadlines coming up so working away at them right now. In between, I've made a pile of books I'm reading and rereading over the next couple of months; it'll be an interesting experiment to see which I manage to get through by the end of May. I've just finished Arundhati Roy's The Ministry of Utmost Happiness and loved it.