...coming later!
Posted by thinktank at 15:56 No comments: Links to this post

and rising (I hope).

I've just begun part 2 of the novel, written in first-person. It's slightly frustrating because I have to go right back to the beginning again - that's how I've structured it - but it's good to be with a new voice, going over the same story from a different perspective.

I may spend some of the afternoon working on a short, and tweaking some more poetry I've written recently. Feels good to be in full flow for a change.
Posted by thinktank at 14:39 No comments: Links to this post

We play tag
Clicking on old photographic gems
From the albums of mutual friends
We 'like' this game
And we’re not shy of announcing it
Over... and over again

I do not ask why
And there are words I find
Too difficult to pronounce
On this particular keyboard:
You still have a way
Of making my fingers freeze

You are the one I forgot
To block
The one I cannot simply delete
From my mind
You make me feel
Like this network
Is closing in around my neck
Posted by thinktank at 14:30 No comments: Links to this post

Hmmm. I'm just glad I didn't get "fronting". Although I could have had some good rhymes out of that one...
Posted by thinktank at 21:24 No comments: Links to this post

SEPTEMBER, remember! (and other sayings...)

Pinch, punch... another month! According to the "old time" hurricane poem (June, too soon, July, stand by, August, it must...), this is the month to remember.

So far, one day in, it looks more like the month to put on layers. Summer hasn't been all it's promised, and then, again, that reminds me of yet another poem I have hanging up on my wall, beginning: "To persevere in hope of summer/To adapt to its broken promise..." No one stays in the UK for the weather, right?

Well, in any case, this summer's gone by pretty quickly. Apart from taking pictures of the name "Keith", which seemed to be plastered all over Paris walls (and someone was kind enough to write "ass hall" underneath the first one I saw), I haven't actually achieved that much. But I've forgiven myself. It's summer! The living's easy, the cotton's high and the fish are jumping, whatever that means to you. 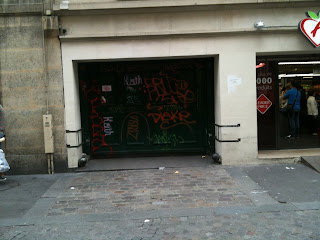 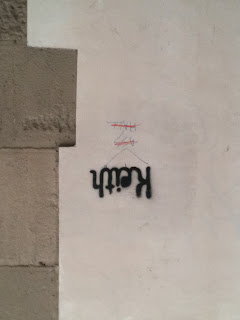 The writing's also not been going as badly as it could be. The poetry seems to flow more these days, whereas the prose requires more dedicated effort. And the wording of that last sentence sends horrible shivers of memory down my spine (anyone whose school reports were littered with "potential" should be able to relate). It's getting there, it's getting easier, it's going to get done. It has to. Enough said!
Meanwhile, I'm really chuffed for a friend of mine, Olja Knezevic. She's just had her first book published - soon to be translated into English, I'm told - and it's already caused quite a storm in Montenegro. It's called Milena, and Other Social Reforms, and from snippets I've read, it's mind-blowing stuff. 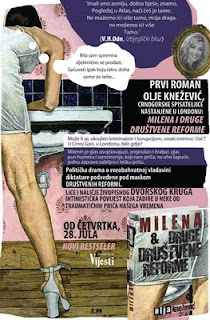 Speaking of storms, have you heard the one about the latest big hurricane - with the deceptively innocuous name, Irene - being blamed on New York's lack of fiscal responsibility? Michele Bachmann, who wants to run for US presidency, has been running off her mouth again. She already looked an idiot by contradicting herself in her "I don't judge gays" interview, but what I find odd is that she's being given air time. I'm probably just as guilty for reprinting ﻿this but, surely... seriously.... say whaat? Once again, it feels like the time it takes for history to repeat itself is narrowing into microseconds. Remember this? The televangelist who blamed Haiti's pact with the devil (over 200 years ago, mind) on the earthquake that hit them recently? Or this? Feminists, abortionists and homosexualists blamed for September 11th? I have no problem with people voicing their beliefs - better out than in, as they say - but if you're in front of a TV camera, or expecting people to get behind you... really? The two previous people had to apologise, and now the latest has laughed it all off as a joke. Ha ha!
And this all makes me remember the simple rhyme we were taught as children:
"There was a wise owl who lived in an oak
The more he heard, the less he spoke
The less he spoke, the more he heard
Why aren't we like that wise old bird?"
I was recited this a few times as as kid, by way of telling me to shut up. That, and "children should be seen and not heard", although the latter was usually said with tongue in cheek. What I never got to ask was, what was out there that the owl needed to hear more of? Or, more importantly, did he really speak less because he was so shocked by what he heard? There seems to be a strange cause/effect thing going on here.... Or, actually, did he speak less because he was eavesdropping and would have been given a huge beating if he was discovered?
Never mind all that... What really bugs me most now is knowing that the less the owl speaks the less other birds get to listen to the owl... There is a reverse side to this whole business here! If he shuts up completely, the whole concept of dialogue disappears. And I think dialogue has its place, even if all you learn from it is that the person(s) you're conversing with has some ideas you find dodgy.
I find Kahlil Gibran's The Prophet interesting for this (you know the book that became a hit among yuppie folk back when I was in nappies...) The subject of the book, the "Prophet", states that "you talk when you cease to be at peace with your thoughts" and that, "in much of your talking, thinking is half murdered". Here, like in many writings, both religious and secular, keeping silent is seen as virtuous.
That idea of silence as a virtue is one I've adopted by default, as I'm never short of opinions being offered, whereas the people who keep their thoughts hidden and eyes furrowed - like that "deep" person sitting quietly in the corner while everyone else is racing around fighting over some big idea - always catch my eye. They're the ones who seem to be above it all. The ones who seem to have it figured out. They shout with their expressions and it can be quite unnerving, or desirable, depending on the circumstance.
Or maybe the real reason I like to stay quiet sometimes is I think I might be wrong, or sound stupid, or reveal too many secrets when I speak? Maybe a little of all of these... In any case, I don't rate the wise owl's wisdom as much as I used to. Sometimes, only listening to the sounds of other people is just as mad as ranting out loudly to yourself in the street.
Posted by thinktank at 21:11 No comments: Links to this post