UPDATES… and, coming up, WATERSTONE'S EVENT

Will keep you posted.


In the meantime, on Wednesday 3rd of September, just one day afterwards, I'll be reading at Waterstone's Piccadilly with Dean Atta and Yrsa Daley-Ward, and will have copies of my recently long listed book :)
Posted by thinktank at 17:01 No comments: Links to this post 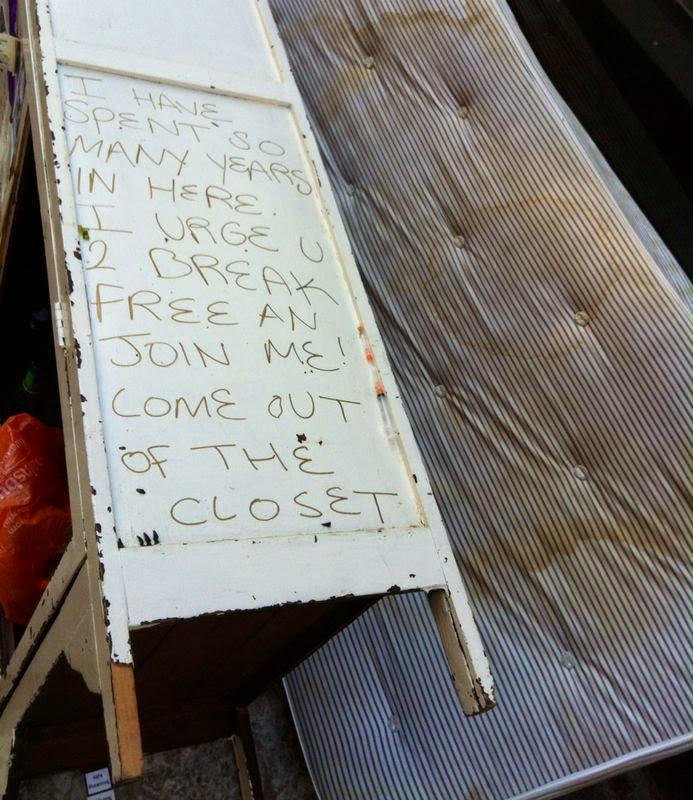 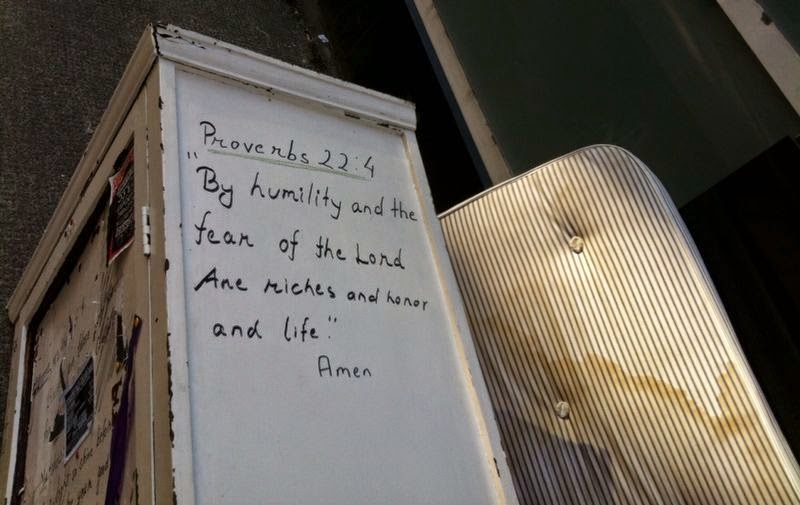 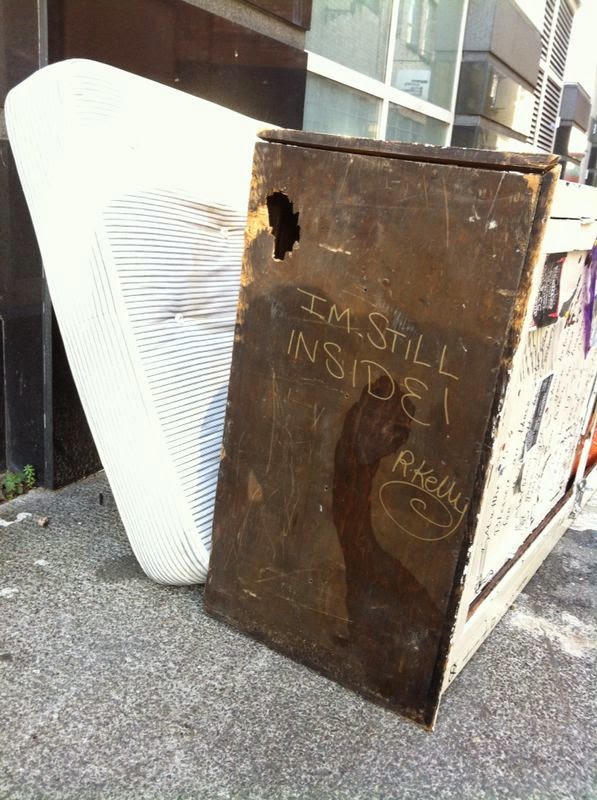 Camden alleyways are always full of the unexpected...

Posted by thinktank at 16:52 No comments: Links to this post

Postcard from home… The Cut

Posted by thinktank at 01:15 No comments: Links to this post

Two Sides of Reluctance, two sides of the pond (with added bits)

Black as the new black

So, I begin this post with my own reluctance; in the absence of wanting to weigh in with my own opinions too much, I present the reflections of others.

Danez Smith begins his 'not an elegy for Mike Brown' with a begrudging:

"I'm sick of writing this poem
but bring the boy. his new name

The tone of relentlessness, of being unable to conjure up the required emotion and the weighing up of his worth against others, is something that then transforms into a reflection on the canon, the "default" white.

"[A] white woman kidnapped and that's the Trojan war" brings to my mind studies that have been done on newspaper column inches for disappearances and murders. It's well-documented (Google it!) that missing white children get much more news coverage than non-white children. (Class plays its part too, it must be stated, especially in this country, where it means much more than simple economic status. But it's difficult to separate race from class entirely)


I first got to read Musa Okwanga's 'For Mike Brown: The black boy is the new nuclear deterrent' when
I came across his tweet which apologised for re-sharing, but a mother had asked him to.

" […]The black boy is so terrifying to America,
That now all of its enemies want one.
North Korea has just put in an order,
Offering twenty thousand black boys and their families
Free schooling, room and board […]"

Here the tone is ironic, sarcastic, full of awareness of international weight. It reminds me just how much "black" is a mark of fashion, of world-recognised oppression, of kudos. When Barack Obama was inaugurated as US President (do you remember all that hope?) it seemed like the whole world stopped to applaud.

I remember being in Paris at seventeen with a bunch of school friends; we were loud and getting in the way of commuters one evening as we walked the streets. "Fucking Americans", I kept hearing from Parisians (at least, that was the only thing I managed to understand). Just a few years later, when Obama was elected, there was graffiti all over the city of him, in different postures - in one impressive mural, he was in a Superman outfit, getting ready to change the world. I was with a friend at the time, and I found myself deliberately talking in loud English, deliberately stretching my vowels and walking tall; this is the only time I have ever wanted people to think I was American. The idea I felt - and the one reported widely - was that his blackness was a game changer. The notoriously racist America had moved onto the next chapter and anything was possible. (TuPac's "I wonder if heaven got a ghetto" and the line: "We ain't ready to see a black President" haunted me then - I wished he'd been alive to see he was wrong.)

If nothing else, black will always be political.

It was interesting for me to read both of these poems in the same afternoon. To me, they're great examples of the British/American divide; it feels typically British to go for humour to make a serious point, to stick to the absurd (or to downplay everything) in order to bring out anger. Danez Smith's poem, on the other hand, is full of his personal feeling right from the outset; despite the precision in his words, despite there being far fewer words in his poem, the feelings are clear and right at the heart of the poem.

Nearly three months later and I haven't managed to write about Capturing Fire in Washington, D.C. I think there was just too much to capture (as can be demonstrated by Thomas Hinyard's 8 blog posts on his journey there).

What I will share now is my memory of running a workshop with Sophia Walker on taking a "British" satirical approach to uncomfortable topics. Racism, ableism, sexism, sexual abuse, homophobia, transphobia and many other social ills came up over again in the workshop. It was clear that the participants - and society as a whole - had a lot to deal with!

The idea of the workshop had been to take painful experiences and craft them into a beautiful piece of art.

I was amazed at how people took to it, but also realised - just sometimes - it isn't easy to take something you feel passionate about, something that still hurts, and change it into something you can laugh at.

In the last two weeks, as I've been travelling around, news items related to Gaza, Ferguson and Robin Williams have all triggered strong reactions from me and friends of mine online. Sometimes I wish there were more space for humour in posts I've seen on Facebook and Twitter. And sometimes I feel not everyone's taking things seriously enough.

My own thoughts on this aren't going to be wildly different from previous posts I've put up here.
We've all read the news. Our thoughts should be with the family right now. But, somewhere, a resentment that has been rising for the longest time has bubbled up and it's not about to go down any time soon.

Boy becomes sacrificial lamb and, mostly, because he fits the profile. Unlike Mark Duggan, whose death initially sparked protest before turning into something else, the boy in question was apparently without a gun and would have ended up in college. Just as much as middle-class white children make for more extended reportage, the presumed guilty get sidelined. Towns throughout the States could have been protesting earlier, just as we need to protest against the fact that not a single suspicious death in police custody has ever resulted in a conviction.

I posted a link on Facebook yesterday which I found provocative and was pleasantly surprised to engage in conversation about it. One friend wanted to know if I've personally felt oppressed by "the system" and whether most of the advice there applies to a British reader.

I didn't answer that directly; for the moment, I'm reluctant. I have one more night of Edinburgh and the news is only faintly coming in through my phone in between poetry sets and redrafts of chapters from my dissertation. Let's wait and see what happens, shall we?
Posted by thinktank at 00:13 No comments: Links to this post

1. You know that stuff about your bibliography? Forget it… You've just read a ton of other essays and you've found a killer quote. And then you realise that you're also quoting extensively from just one writer… At the rate you're going, you'll be reciting her word for word.

2. Spend ages on the introduction. I mean, it's not actually about the study, right? Give an extensive personal history, complete with dental records, what you've had for lunch…

3. Oh, did I just mention lunch? There goes another four hours. 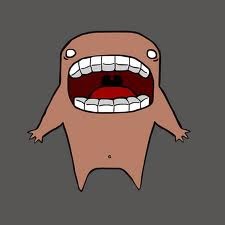 Then spend the next couple hours inserting then re-inserting a quote which may or may not be relevant but it sounds oh so good.

Posted by thinktank at 21:42 No comments: Links to this post

Edinburgh Itinerary… plus BBC Proms Plus tonight on Radio 3!

I'll be up in Edinburgh right at the end of the week! From reports so far, it's been yet another rewarding year for poets and other performers. I'm just glad I didn't register to do another show*.

I'll be popping up at the following shows to do a poetry set. They're all at The Banshee Labyrinth, which hosts most of the PBH Free Fringe Spoken Word shows… Oh yeah, forgot to add - they're all FREE to attend.

Then, I'm looking forward to seeing one of my favourite writers, Kei Miller at this event.

And I also can't wait to see Frank Sent Me, which I saw in one of its earlier incarnations at Soho Theatre, just before it won an award.

Looks like I'm going to have a decent few days up there!

*After all, I'm meant to be finishing a dissertation here! Word count so far: a pitiful 2,500/12,000… But I have successfully completed the appendices and selected most of the accompanying poetry portfolio. Let's see how today/tomorrow fare.

If that isn't enough excitement, snippets from last Saturday's show at the Proms will be broadcast on Radio 3 tonight at 9.30. Listen in here.
Posted by thinktank at 12:34 No comments: Links to this post

Today I spotted an orange
butterfly twerking nervously
between the hoops hanging
from the rail of the overground
train and a look passed between
my eyes and yours, just as fleeting.

Posted by thinktank at 01:33 No comments: Links to this post

As usual, I'm having a full couple of weeks, but luckily I've also had some free time to read/research for my dissertation and enjoy the sun. Here are a few highlights of the past week or so and things that are coming up in the next couple of weeks:

Feels much longer than a week ago! Ah, Anti-Slam... it shows me the potential the performative side of poetry has. All the poets were appalling; the hosts, and scorekeeper, were ridiculous; the judges - including my alter ego, The Conscious:Ness - behaved appallingly; and yet, the night was compelling. Perhaps it should be classified more as comedy theatre than poetry, but I think poetry nights could take a leaf from the book of the worst poetry gig you've ever attended.

Far from the regular poetry slam mantra: "The points aren't the point; the point is the poetry", I actually had a great time getting to know fellow poets over intense conversations and wrestling bouts. The time I spent spitting any poems went very quickly and the rest was just much-cherished play time.

Remember how excited I got when I finally released this last year?

Well, it's now been longlisted for the Polari First Book Prize... I'm pleased to also see my colleague Dean Atta and two other books I've read and enjoyed. More on the prize can be found on Polari's website here.
(Oh yeah, and I'll be in Birmingham in November as part of the Polari tour, so also looking forward to that! I won't say any more until September-ish)

Before we get to Birmingham in November, I have a few gigs in London coming up. As per the last post, I'll be at the Proms on Saturday. I mean, how great is that?

So far, here's my timetable for gigs I'm performing at:

I'm hoping to see a few shows too - and spend time reading over my (hopefully completed) dissertation. Links for the above shows to follow...


Posted by thinktank at 15:47 No comments: Links to this post

I'll be performing alongside Street-Nelms quartet on Saturday as part of BBC Proms Plus Late.

I'll post a radio link for those who can't physically be there on the night! Looking forward to getting my swing on... and doing some poems in between.

x
Posted by thinktank at 15:02 No comments: Links to this post