Dog-eared and ragged, they wiped it down best they could
Said I was an old soul anyway

So I chewed on it, kicked it, rattled it
Till jazz piano lullabies tinkled out on my baby stool

I carried it to school on my shoulder
My friends called it Parrot, Chief and Mellow Man:

It was the way its yellow eyes shut on top of class desks
I guess it was because it lacked focus.

Older now, it became a pet I couldn't bear
To hear barked out on buses

My name was too dirty, too old
Too much like my father

It swallowed me up and belched proudly
Leaving me where I still remain: trapped inside

My name
is now writing poetry, last I heard
Tells tall tales about its origins:

It can be found tracing its roots
To some old Celtic village where it once meant something.

Draft 1
I thought I'd give a quick outline of how I sometimes draft poems...

Following a workshop in which a group of us used Patricia Smith's 'What It's Like to Be a Black Girl' as inspiration, I ended writing notes for something I titled 'What it's like to be named after your father'.

After 1, I thought about 2 mistaken Facebook friend requests from my dad's friends, then created a number 3, skipped 4, thought about the 5 letters of my name, then the fact that there were 6 of us in the house when I was a kid, and I was the "Junior", before going through 7 more quirks about having my name.

Draft 2
I ended up with the first draft of a poem that I'll probably develop further in the future. Some parts worked, others not so well. For example, I used the numbering system to structure the poem. Instead of using the number "four", I used the word "for" and had a four-line stanza for the fourth item:

By the time I got to seven, I ended up getting lost in the form and going away from the point, which was more specifically about having had a name passed down.

Draft 3
Continuing with the 'echoing' theme, for a school project I also had to write something about my name and where it comes from. One of the lines that didn't work from the 2nd draft was:


It is learning to recycle and re-invent.

I flipped that and started writing about a name that has been recycled. I also used the jazz pianist reference again but more subtly (in the original I relied too heavily on the fact that there's another famous Keith Jarrett out there with the lines: "It is two friend requests on Facebook last Friday/ from Jazz-enthusiasts, retreated in quick succession". It had little to do with the theme of the poem).

Draft 4 will come once I've given it some distance, and after some feedback.
So there you have it... my name in 3 drafts!
Posted by thinktank at 11:20 No comments: Links to this post

I feel like I've been living and breathing poetry of late. During the last couple of weeks, there hasn't been a single day when I haven't written, performed, studied or taught poetry. There have also been a few days when I've managed a combination of three or four of the above. And, like any other art form, it needs a well to draw from, so I'm looking forward to spending two or three days next week on some completely unrelated projects.

The last three events I've been at have been exceptionally memorable for different reasons:

Alongside G. Winston James, I read out some poetry at Brixton Library on Thursday and it felt great to be around a very receptive audience to a mostly-new set of poems, ranging from topics such as sex within a forced marriage to the concept of Black History month, and more...

Friday, I performed at a fundraiser for Olive Branch / Sandblast Arts Youth Theatre productions; they're raising money for a trip to Western Sahara on the 26th October (i.e. end of this week) and more info can be found on here.

Sunday, as part of the Bloomsbury Arts Festival, I took part in a Human Rights Court Case 'Slam' at Senate House alongside some great performers, some of them good friends. We each had to present a poem as a human rights 'case' and I won thanks to some very generous judges. 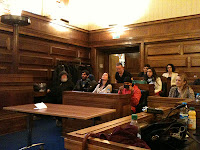 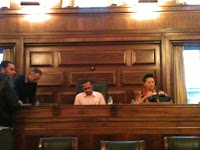 My final gig of the month is still to come on Friday - I'll be at Willesden Green Library performing some reflective poetry for Black History Month - and I feel I'll have come full circle, after I ended last month in the opposite corner of London in a library, reading out poetry that connected up some of the dots for me about Black History and what it means.

Posted by thinktank at 15:16 No comments: Links to this post

(And looking back, the last Random Word I picked up was "borrowing". Is there some kind of theme?)
Posted by thinktank at 14:36 No comments: Links to this post

When they say this is Black History
Do they mean this is history without the whitewash
Without the grey areas or red herrings – just one big old black hole
For school kids to sink kissing teeth into?


It's the 1st of October and Black History Month is upon us. As I put in a poem I wrote for last Friday's event for Lewisham libraries, "black is infinite and history is never over". Incidentally, it was a really enjoyable night and I feel I learnt a lot and shared a lot with all those present.

The idea of a month to celebrate and learn about black history is at best a temporary solution to the fact that so-called mainstream history has been quick to omit much of what needs to be learnt about the nations and peoples who all too often end up in the chapter about slavery and Empire (turn to your GCSE textbooks and highlight page 364). At worst, it's a way to build up resentment on one side ("Where's our white history month then?") and a quota-filling culture on the other ("Let's pencil you in for October when we have a budget for your sort of thing...") I do, however, like to look on this month in its best light and take it for what it is: one of the only months when local councils and schools like to employ poets for added cultural value (don't worry - I'm pulling my best cheeky face as I write!)

I've a feeling I've said all this before though, so I won't go on much more except to say that I'll be using the month to read as much history as I can, via the stacks of fiction and poetry I have waiting to be opened on my bookshelf. Also, seeing as this summer marked the 50th anniversary of Independence for both Jamaica and Trinidad, there are a couple of events celebrating the two which look very interesting to me, and I'll keep you posted here.

The most exciting thing for me this month, from this week onwards, is that I begin my course at Goldsmiths in earnest and I also start teaching Spoken Word at a school in East London. This is all for a new programme that will see six of us trained as full-time Spoken Word Educators; the scheme will hopefully soon be rolled out across London and beyond but this is the pioneering year and I expect we'll all learn a lot along the way.

The people I'm on the programme with read are real gems who I'm glad to know: Raymond Antrobus, Dean Atta, Catherine Brogan, Pete the Temp and Indigo Williams. And I see that Ray's posted something up about it, so I'll not say much more!

I shall be doubly busy, however, which means I've had to ask for extra patience from friends... and to forgive any emails not replied to - resending usually helps ;)

Guernsey - So yes, being part of the Guernsey Literary Festival was great; yes, I promised pictures ages ago and yes, I have some right here: 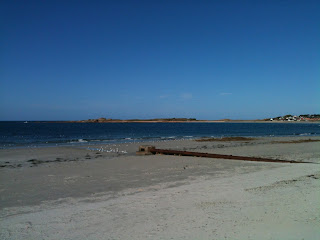 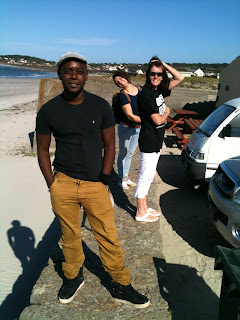 Before - and perhaps during - the trip, I imagined my camera would return full of pictures of cows and farms or at least the outsides of the venues where we did workshops, went to festival events and set up the Slam on the final Sunday. But no, thanks to having people with better cameras snapping the juicy stuff from the Festival, I have tonnes of pictures taken near the sea, looking towards the sea, above the sea, in the sea... There seems to be a theme. 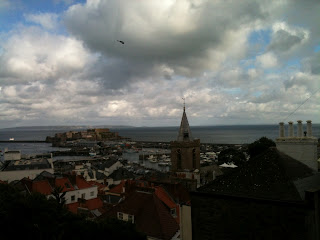 I was lucky enough to travel with Katie Bonna and John Paul O'Neill, who runs the Slam. This is actually a standard snapshot of how we spent the day. We got to work with some enthusiastic people, and some really great kids, who were brave enough to suspend both their misgivings on poetry and their public performance nerves and work on wildly-varying and imaginative poems based around this year's National Poetry Day theme, Stars.

A brief summary of what went down at the Slam - the final event of the Festival - can be found here.

The book - Having not had time to do any work on the novel for a month but wishing it complete, I'm redoubling my efforts this week and am aiming for another 5,000 words by Saturday. Doable, yes?

The gigs - 3 out of my 5 weekday eves are guaranteed busy these days so I have less time to go to gigs. Which means I'll be a bit more picky about where I go. Which can't always be a bad thing.

The rest - Will update here again soon... Next gig is the launch of RTJ's Big Heart at The Albany, Deptford, next week.

Good times!
Posted by thinktank at 18:18 No comments: Links to this post