10 (or so) Things I've Been Watching lately

Happy Solstice! The days are about to start getting longer - one small minute at a time...

The daylight hasn't been forthcoming lately but relatively mild weather has kept me from becoming a hermit. Unfortunately, others haven't been so lucky what with floods and storms... and signs of the times.

(This is, of course, doctored and the original - and other versions, complete with dramatic music - can be found elsewhere online).

Speaking of other versions, I first came across this advert over a week ago and was puzzled... It's kind of genius marketing. Strange it may be but it's not easily forgettable.

It does several things at once:
i- shows Robert Dyas as being a "progressive" institution (bringing a kind of "some of us are gay, get over it!" Stonewall-esque flavour)
ii - gets them into the news and social media/blogs (including this one)
iii - injects some weird humour into the domain of the Christmas advert.

I later found out that it was a spoof of another spoof ad:

Whilst I disagree with the statement, I guess this is what people mean when they say "gay" is the new "black".

What's interesting in both videos are the initial binaries set up - white/black, gay/straight - and then the extra inclusions - latino, bisexual - and then the groups that are not mentioned - mixed heritage/ trans/ asexual etc. It would be interesting to see what adverts like this would look like in a decade and how the language will change - and whose diversity will be prioritised.

The last two weeks have been manic in many ways. I've wound down from uni for the year (it's come around so quickly) and then I ended up with the flu. I've also been affected by things around me: the agreement for Britain to join the "let's all bomb Syria" project (although I strongly suspect it would have happened/ has already been happening with or without the parliamentary go-ahead) and changes to government's housing policy - including this - have made me angry; the general noise of getting involved with Christmas - and endless end of year socials - has left me feeling exhausted. Perhaps to mitigate this, I've been watching a lot of television.

Speaking of prioritising diversity, a friend (who I won't name) put up an angry social media post about the first programme 'Gay and Under Attack', warning people not to watch it. So, of course, I did.

The show was scarily predictable and did nothing to alleviate my anger at other things. Yates pretty much goes around London, mostly, finding black and Asian people whose families don't accept them for their sexuality/gender identity - with one notable exception - the implicated (and sometimes stated) conclusion being that:

a) black families aren't tolerant
b) English families are
c) Islam is intolerant (yep, that was a running thread)
d) gay black people huddle together in exclusive club nights for protection from everyday discrimination (on that note, another documentary focuses on a related club night in a totally different way)
e) black and Asian people usually avoid the visibility of Pride marches for the above reasons

Even with the one notable exception, the "accepting" father argues that Jamaican culture is really homophobic, but he grew up around white people... and the suggestion is made that this pretty much accounts for his tolerance.

The friend in question knew about the programme before it aired. It transpires that he gave some pointers to the team about opening up their research. But the programme, even before it had been filmed, was already made. If you have a pre-configured story and you want to find homophobic Bangladeshi Muslims, or West African Christians, or Jamaicans, and so on, it's easy to do so, and they'll be vocal about it. But if other people approach you - or even if they don't, and you simply want nuance - and you dig harder, something new and original might come of it that doesn't just perpetuate stereotypes. But in whose interests is it to tell these stories?

Curious about the series, I watched the second programme on the anti-feminist MRA (Men's Rights Activist) movement and the "menosphere". Again, knowing little about this world - other than through friends who have been harrassed for invoking the "gamergate" hashtag, or have had been intimidated on and offline for defending certain people - I wanted to hear a story that didn't just rehash what I already knew and expected.... Unfortunately, it didn't do much better. While I have very little sympathy for men who feel society has become too matriarchal, or for the (straight, white) men who are unhappy to see their privilege questioned and challenged - and sometimes reduced - I felt there was also room for more nuance in this programme. The men writing anonymous death threats are not necessarily in line with the men on Speakers' Corner arguing about feminism being bad. And somewhere along that scale are the women who relate to these men who have these views in some way. I found myself wishing for another angle. For a story that didn't just confirm all of my prejudices and tick them off so I can file them all away.

*
Even when I'm writing fiction, I need to allow myself room for surprise if I'm to end up with a powerful story. I'm wary of anything that poses as "objective" or a complete picture, and I'm wary of dominant, authorial voices that silence the others.

Now I'm also writing an academic paper, I'm extremely wary about letting my pre-formed opinions dictate the outcome. And so when I see this happening, it makes me feel very frustrated. More than ever, it's important to hear stories that make us feel uncomfortable and that challenge our world view. It's so easy, otherwise, to stay in a very insulated bubble, being topped up with status quo- affirming bullshit.

On that note, I was also taken aback by this programme. Offering to shine a light on the everyday realities of Tottenham residents, giving a more honest picture of the neighbourhood, the documentary starts off with a video montage of all the bad things that have been associated with Tottenham from police brutality to riots that went national via baby killings. And then we end up in MP David Lammy's surgery, which frames the rest of the programme. It's odd how you can purport to remove a wrong association by rehashing it immediately. I'm sure there's a more succinct term for it, but it's good reverse psychology to entrench an implicit association while explicitly rejecting it.

(You can do this with anything... For instance, a disturbed individual with a knife attacks someone and mentions ISIS, among other things; a bystander reacts: "You ain't no Muslim, bruv"; that phrase becomes a Twitter anthem and is quoted by the Prime Minister; the incident is reported as a terrorist incident, even though it seems more complicated than that - and even though he was a lone attacker with a sole victim. As the word Muslim - and the double negative proceeding it - becomes more well-known than the attack itself, the word Muslim is what stays in people's minds, regardless...

Need I go on? How about the way in which any report about Notting Hill carnival begins or ends with how many people were arrested? Even when figures are low, given the scale of the event, an implicit association is made that makes it easier to impose safety measures designed at getting rid of it. Same goes for mentioning the "articulate" black guy - as parodied on this page.)

I invoked the "c" word: culture.

Cultural appropriation as a concept hasn't taken off as much here as it seems to have, Stateside, for a number of reasons. But I've had a few interesting conversations about this.

Meanwhile, as more people seem to be interested in re-framing power relationships (or, as some would put it, being "PC"), I'm also seeing a backlash. I've also seen the kind of "go back to your safe space" insults, which conflate veganism with social justice ("SJW" now being used as a slur against certain PC types).

One theory about the rise of fascism puts it down, partially, to liberalist ambitions to install gender free bathrooms. Apparently, liberals are getting eaten up with dogma and ignoring wider issues.


Someone needs to pass around the memo that it is ok for people to push for changes that seem petty - pronouns, descriptors and, yes, bathrooms - whilst also remembering the bigger fights. We are always in constant (re)negotiation with culture and shouldn't be afraid of challenging it.

5b. Although, according to Prince Ea, the solution to everything is to remove all our labels... Erm, well...

Moving on, and staying on the other side of the pond, this came up on my Facebook feed. Controversial, and some of the points about legality of false information is frightening. But, as we're becoming more and more saturated with information, it seems more difficult and more important than ever to double check sources and not just rehash everything that has been reported.

Why is that important here? Well, reading about the transatlantic trade in unsubstantiated "news", in a quest for legitimacy, it would seem to be of the utmost importance.


Speaking of media manipulation, if all else fails, a Trump or Corbyn story will do.

I think we need a cute story break...

I can't believe I've nearly got to the end of a list without once really mentioning poetry. I have brought up this project before, though. Friend and fellow poet Sam Berkson travelled a couple of times to the little-reported-on Western Sahara and helped translate some of their respected poets' work, while also writing about the experience. It's great to see this film, having heard about some of the people and places there, and read the book. Hopefully it will give more exposure to their plight and bring this exile situation to an end.

More poetry... well, sort of. This time, it's Ray Antrobus talking about poetry. It's weird seeing him on YouTube in this way - a lot of conversations I have with him involve him enthusing excitedly about some poetry book or another (which I invariably go and look for, and enjoy!) precisely like this.


I'll be tuning in to see which books he comes up with next.

Hmm, so I ought to wrap up and return to my themes. I've hit my usual territory now: poetry, politics, sexuality, race... but I've been missing religion.

This particular video needs some context because, like the videos right at the beginning of this post, it's a remix/parody of something else. The singer/rapper Drake released a song which has, for some reason, gained a lot of notoriety (it's catchy but it's not the best song in the world... yet you have Erykah Badu remixing it with her own soulful version, and countless spoof videos, including this one, featuring Donald Trump, of all people. I mean, what's going on?!).

Anyway, if you don't know, here's a link to the original

Given this context, along comes a recorded church service where singers try their best to overlay the song with gospel lyrics and perform it (briefly imitating Drake's dance). Like the Robert Dyas ad, I'm a tad confused, but find it strangely compelling.


That said, right now I would almost give anything to return to the relative safety of the pre-YouTube/Facebook 90s, just for a while, while I recover.

Posted by thinktank at 10:30 No comments: Links to this post 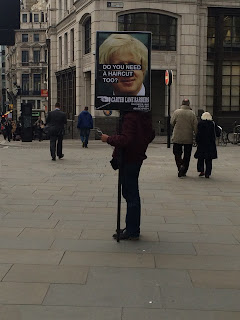 Posted by thinktank at 23:52 No comments: Links to this post

Posted by thinktank at 23:59 No comments: Links to this post