Yeah, I know... I said I'd be showering the blogosphere with lyrical wit and generic musings and other such labrish on a regular basis but, you know, everything in its time. The past couple of months, for me, have seen a lot of change - and I'm hoping for the better - and so I'll be sharing some of that in due course.


Meanwhile, some good news for this week: somewhere in London (Tooting to be precise) there is a gold-sprayed Action-man-style trophy with dangerously jerky arms to certify that the London Slam team won a prize at Bristol's first National Team Poetry Slam. Phew! If that statement needs any more emotion, there's a tear-inducing video to come, once I can deal with my computer problems... In the meanwhile, let's be content with a couple of pics: 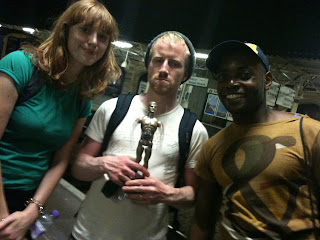 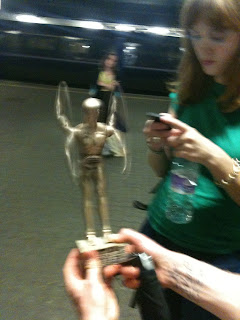 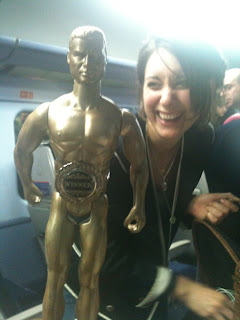 If you've seen my previous blog about slams (link later) you'll know that I don't like when they're taken too seriously. In my opinion, it's a great way of sharing words in a competitive, non-pretentious and non-rambling way (more than three minutes, dude, and they deduct points!). Slam has its flaws but also its beauty, just like any other poetry format. It's also rare to stick together a bunch of people from cities I've never visited in the name of poetry.

Ok, time for me to reset this computer, unfortunately, so will have to continue this later!

That's right, thick and fast, they're coming! But need to wait for a video or two to upload and I have work on now so should be with you later tonight/early tomorrow.

Posted by thinktank at 15:26 No comments:

And Today's Random Word Is....

Posted by thinktank at 14:30 No comments:

So, last weekend - as in the really long double-bank holiday weekend that ended last Tuesday - I was mostly in Sussex poeticising to the festival masses at Meadowlands. It started pretty bright and sunny and ended damp and cold, as all bank holidays should. More pics will emerge over time that weren't taken on a shaky camera phone, but irreverent poets, papier-mâché griffins and bell towers with disco balls aren't bad ways of summing up my experience. 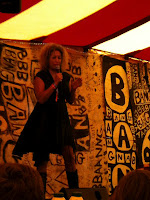 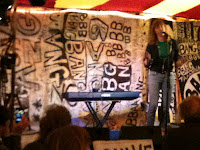 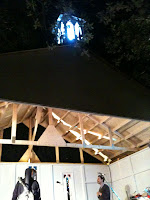 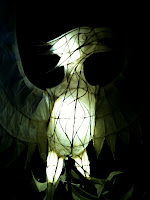 I got carried away in my dislike for anything Jubilee-themed, spurred on by the fact that it was impossible to get away from it; suddenly, the most un-patriotic people I know were digging up Union flags from nowhere and following the long parade along the Thames river. The news was suspended - at least on the BBC - until Tuesday evening and I felt like an alien for being detached from it all. Even the criticism the BBC received was largely to do with how the river pageant was covered rather than the fact that nothing else was covered at all until it ended, including deaths in Nigeria and Syria... all irrelevant.

One of the poems I performed was written in the car park outside Sainsburys on my way down to the festival and sums up how I felt at the time:

How can we complain?
Two wet bank holidays
We wouldn't get
If our reigning Queen
Was deposed or guillotined

I suppose I can't be mean;
To oppose innocuous waving of flags
Over tepid tea
Sounds bitter to me

Maybe it's a fallacy
But can we really call this democracy
When it's surrounded by the hypocrisy
Of hereditary privilege?
And would it be wise
To swap our Gracious Queen with her pomp and pride
for Royalty-free lives?

Let's question our current situation
Reassess the equation
And not get hung up the hype
Blown about like cheap bunting
On the jubilee wind
Blindly following
Swallowing the saccharine sentimental celebration
For we are subject to no one
But our own whims
We are Kings and Queens
In our own rights
We should celebrate our own lives
And think twice
About these parasites
Although yes, an extra bank holiday is
Rather nice :) 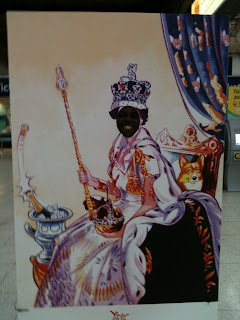 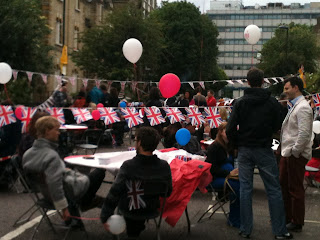 As my change in tone suggests, despite my feelings on the matter, I'm prepared to accept that I'm the odd one out. So, on Tuesday, I ended up walking through a street party and smiling back at people who wouldn't otherwise have looked my way were it not for that warm blur of good feeling passing through (some) streets.

the festival season has sprung up quicker than my tent on a rainy day. I won't be that busy with poetry gigs over the summer but I hope to go up to Edinburgh for a couple of days... So I was happy to see AN ENTIRE SECTION dedicated to Spoken Word. How this has come about is explained in detail here.

As I keep commenting, spoken word/performance poetry seems to be taking on a different hold now in the UK. But as the link shows, that creates whole new problems. It is interesting to see, for instance, that Bang Said the Gun continues to self-identify as "comedy" rather than "spoken word" - and understandably too; the concept of comedy appeals to a much wider audience than "poetry" or "spoken word", which can sometimes sound too clever or high-brow for what the terms actually describe.

I often get asked to explain what performance poetry is exactly and how that differs from written poetry. I now always use comedy as an example. A joke can be funny written down, yet it takes on another quality when it is told; a comedian can manipulate sounds, volume, tone, timing and body language to convey a joke and this is where the difference lays.

Spoken poetry is, in many ways, more immediately accessible than written poetry, and a lot of other art forms; it is now for the rest of us to catch up and embrace it. And maybe one day, perhaps, comedy acts, theatre acts and musicians will be begging to be included in the "Spoken Word" section.

Posted by thinktank at 16:18 No comments: