(And just as I was about to up from the desk...)
Posted by thinktank at 14:31 No comments: Links to this post

It's great when so many people offer their opinions on an issue that you don't have to. My overriding feelings on the latest issue de jour kind of follow fellow poet Suli Breaks, in that it's all too easy to adopt an 'anti' stance by default, and criticise other people for not knowing their facts, when you know even less. Whilst some of the facts of the Kony video may be distorted for the purposes of propoganda, and whilst the Invisible Children charity has a few question marks hanging over it, the resulting awareness of the video is good and the most basic facts remain true: it's a cruel world out there.

Speaking of propaganda, I found this video, by the European Commision, hilarious:

Needless to say, it's now been pulled. Racial epithets aside, it's just weird and it's just wrong...
Posted by thinktank at 22:22 No comments: Links to this post 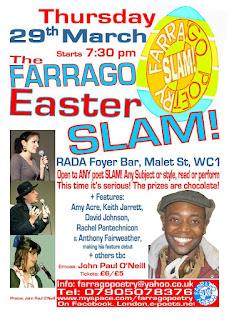 More details here...
Posted by thinktank at 17:15 No comments: Links to this post

...Hail
Posted by thinktank at 09:22 No comments: Links to this post

I've had difficulty catching up with it all these past few weeks. I started writing something on National Library Day (Feb 4th) about libraries and my problems with Borges - who of course, wrote the mind-wrangling 'Library of Babel', and then I dropped it in order to keep up with the pace of the novel; then it was Valentine's Day, and I wrote a couple of poems for an event on the 14th; then I wanted to comment on LGBT History Month before it ended (too late - even though I had an extra day, thanks to the leap year); then it was World Book Day last week, and I took part in a slam at LSE, which I wanted to write about as I was really affected by a couple of the poets and the conversations that followed the event... and finally, yesterday was International Women's Day, which found me in Brixton at Calm a Llama Down.

In between all of that, I've caught up with some old friends going back as far as my first year of secondary school, I've slugged my way through Nietzche's Beyond Good and Evil, chucked it down, cursing, picked it up again, chucked it down, read five other books and cursed again, then had random conversations about the meaning of truth and authenticity and Whitney Houston's death. Oh, and tried not to be amused by Prince Harry dancing in Jamaica. It's nearly too much for one man to take! 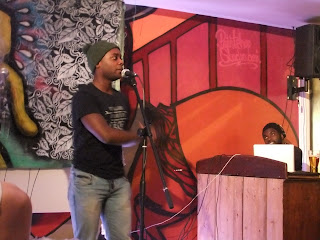 I crossed over the water yesterday for what was a really enjoyable night in Brixton, not to mention the cheapest cranberry juice I've had in a long time. I did a full feature set, along with Jasmine Cooray (legend) and multimedia musician Benjin, plus a lot of open-micers ranging from serious to way-out there... too many to name! Not many people seemed to take on the theme International Women's Day, until Catherine Brogan jumped up on to the mic and remarked to all of the critics who say, "Why don't you have an international men's day?" with the retort that pretty much "every day's been a men's day for, like, ages now", before performing a poem beginning with a comment about certain BBC employers and all the ladies who sleep their way up the job ladder.

The thing is, as much as I'm on board with the principles of Women's Day and would describe myself as a feminist in the traditional sense (i.e. that I don't believe women are from Venus and men from Mars) I'm loathe to tweet a pro-woman message or write a poem on domestic violence, or post a quote from, or a picture of, a woman that inspires me. Checking out the face-twittersphere, I can see a lot of people I know have done one or a combination of the above, and that's fine; I just wouldn't feel authentic if I'd done so myself.

One of my friends posted the following on Facebook, which I did find interesting:


If I were a woman, I would earn 21% less on average but I would actually get served at Brasserie des Halles; I would be more likely to suffer violence at home but less likely to suffer it in public, I could take 9 times more parental leave but would have less chance of a promotion if I were of "child-bearing age", I would be more likely to be called a slut for exposing my skin but less likely to be called a paedophile if seen with young children. Happy Women's Day - now pay attention to what society does with your gender.

For me, it does really highlight the nuanced gender and social inequalities and prejudices around, things that can only be challenged by direct action and not by tokenistic gestures.

Speaking of tokenistic gestures, when I have more time to process the hype that is Kony 2012 (if you don't know... click the link), I will write more. In the meanwhile, outside of the two extremes - that is, of the people who are forwarding the video left, right and centre and of those who are so cynical about it they believe it's a foreshadow of US invasion (for business interests) in Uganda and surrounding countries - two things have kept me a bit more centred. One was Musa Okwanga's more measured  - and, as always, quite sensible - response on Channel 4, and the other was a video I found on YouTube from a guy who looks/sounds half-crazed but captured my sentiments with the following line:

And so, just as I commented in October, when I criticised the fact that the Prime Minister had written some bland, heavily sound-byted introduction to the Black History Month magazine, I repeat the same idea again here. We can pay lip-service to things like Women's Day, or LGBT history month or anything else that is supposed to recognise so-called "minorities" but, too often, it doesn't change any of the facts that underpin our need to address issues affecting these groups. If I thought a "men's day" would do anything to redress the social imbalances which affect men then, sure, why not have one? But, the way I see it, all of these days are going the way of National Book Day: a great tool to use for lesson-planning and assemblies in schools and nothing else. Because outside of the educational domain you're either preaching to the converted or superficially addressing issues over the space of 24 hours (or up to 31 days). Those who could really benefit from engaging with the issues will doubtlessly feel affronted and make bitter comments (they don't have a day for me! What next, a second-child-in-the-family, cross-gender, left-handed week?!)* or it will fly past them unnoticed.

Now, don't get me wrong: I'm not discouraging direct action to change social imbalances and recognise achievement among so-called 'minorities'. But women make up around 51% of the population, I've been led to believe. Most of us know at least one woman - and a lot of us were given birth to and raised by a woman - so having an "awareness day" for women isn't quite the same as it would be for say World AIDS day which, despite AIDS having a massive effect on the world, isn't something that everyone directly encounters every day. And yes, I'm purposely contrasting World Aids Day to - and not with - IWD to highlight the fact that recognising those affected by the disease and the campaigns to stop the spread of AIDS and its stigmatisation, needs to be dealt with in a different way to a day designed to celebrate women and work towards the undoing of centuries of oppression. Much of what needs to be done, I feel, should be more targeted to specific causes, rather than let it slip into becoming another useless tool for twitter users to argue nonsense over.

For this reason, when some people I know took part in SlutWalk last year, I was intrigued. Intrigued, because it was much more focused than a "women's day" could ever be, and also because it made me feel uncomfortable. I've learnt that uncomfortable sometimes is a good thing; it means I'm being challenged on where I stand. It started with a Canadian policemen advising just ten students that "women should avoid dressing like sluts in order not to be victimised", and has developed beyond that into a challenge on societies that share those views, with a load of scantily-clad women - and men - taking to the streets last year in protest.

Now, I've seen enough walking wardrobe malfunctions on the High street to no longer bat an eyelid when I encounter them, but I'm not an advocate for walking through the streets in just your underwear. That said, I see a very hypocritical society which still judges women on appearance and social behaviour much more gravely than men (I mean, just look at what the BBC does to its female presenters! Sorry, cheap dig...) And whilst 'slut' - or any of its equivalents, like "slag" or "sket" - are still vicious insults for a woman, sexual prowess is seen as acceptable, and in many cases, something to boast about for men in society. And all of this contributes to the fact that, whilst everyone should be careful about their personal safety, regardless of who you are, those who choose to dress or behave in a way that is not approved of by everyone are blamed when things go wrong. So, because of this, I've chosen to get involved in a fundraising event for SlutWalk  next month, but I shall talk more about that another time.

So I have a few more things coming up this month, and next month too, which I'll add to the Upcoming bar tomorrow. I also still want to talk about the LSE literacy week slam and the meaning of life and share the pics I'd promised from the Cuba trip and blab on about something else... but that can all wait till next time.

Logging off!
Posted by thinktank at 17:52 No comments: Links to this post

Calm a Llama Down

Woo Weee! So my next gig is going to be at Calm a Llama Down in Brixton tonight. It's a recent night to hit the poetry scene and already looking good. The out-there name, I believe, is taken from the good old Mighty Boosh. Hopefully see you there! 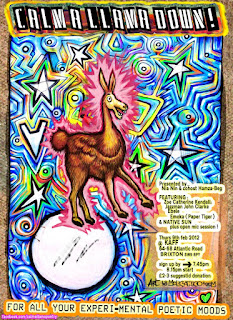 Posted by thinktank at 07:40 No comments: Links to this post

(This shouldn't be too hard!)
Posted by thinktank at 11:55 No comments: Links to this post

...Coming later on
Posted by thinktank at 11:02 No comments: Links to this post

(That's what came up, although it's the last thing I want to think about, which means it's probably the best thing to write about.)
Posted by thinktank at 11:01 No comments: Links to this post