This one almost needs no other words... Joelle Taylor and Karen McCarthy Woolf. Hello?!!

If you don't know either, then this evening is a good time for that to change. It's also the launch of a new Out-Spoken anthology. Come along!

More details here.
Posted by thinktank at 08:46 No comments: Links to this post

Let's all take a reading break...

This week has been full of turbulence and distractions. Aside from the Referendum result and all sorts of instability being unfurled, I also presented at my first PhD symposium, where I tried not to stutter through an overview of my PhD.

All that said, I'm slightly behind schedule with my research project and need to fill some of the gaps in my transcriptions folder. Anyone who has any ideas on how to make transcribing interviews any easier/fun (without paying someone else to do it) gets my lifelong gratitude. Please contact me urgently about that! In the meanwhile, I'm plugging on.


I took a break after a meeting earlier this week to go to the Poetry Library and am excited about this eclectic choice. Nikola Madzirov read at Calabash Festival in Jamaica this year - I found some of his poems mindblowing - and Colin Channer edited the first anthology of the Calabash Festival. I've also been waiting to read Dominique Christina's collection for quite some time. The same goes for Michelle Madsen, friend, boater and long time slam scene organiser.

Along the way, this week, I've also picked up poetry by Nick Makoha and Jay Bernard, and another book I'm excited about... but more on that later!
Posted by thinktank at 22:41 No comments: Links to this post

Posted by thinktank at 23:27 No comments: Links to this post

On Thursday, I'll be at Hackney Attic for a Queer'Say EU Referendum Special - which is a part of Pride in London - alongside Nick Field and Ali Brumfitt.

We're working on a Euro theme for the night, and I'll be performing some new stuff!

To keep you going until then, here's an interview I did for the occasion (and check out some of the others on the blog).
Posted by thinktank at 23:03 No comments: Links to this post

I'm back from Jamaica with a bang! The last couple of days have been challenging, but here are 5 things to fill you in with. There'll be more on Jamaica and on upcoming gigs over the next few days so stay tuned!


First and foremost - and hot off the press - here's my Poem Poem III, as recorded by the Muddy Feet crew. They release a new spoken word video every Tuesday at noon, including some pretty awesome lyrical heavyweights.The last few uploads include Tshaka Campbell, Raymond Antrobus, Paul Cree and more.

This poem, despite being rooted in time/context-specific references (UKIP politicians blaming floods on gay marriage, wrecking balls and blurred lines, police being cleared of wrongdoing for Mark Duggan's shooting, etc. etc.) holds a lot of significance for me in light of the current mood here. 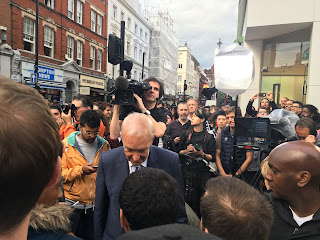 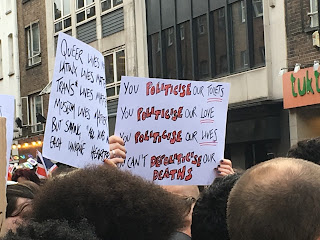 I'm unsure of what more to say. I recently posted on social media that it's better to keep silence and wait for facts than to draw in with well-worn opinions (on guns, Islam, immigration and goodness knows what else). What irks me above all is the wild hypocrisy of some people who are jumping in on this tragedy. Only in the last month, US states have been debating whether or not to legislate against some people using public bathrooms, based on their gender (petty much?) while other people are still given airtime for dodgy views such as marriage equality being responsible for the September 11th terrorist attacks... (Face palm).

Yes the shootings were an attack on "our freedoms", whatever that means; more specifically, it was an attack on LGBT people and, no doubt, many people who fall under that umbrella term will feel less safe as a result. If you don't get why the interviewer and Julia Hartley-Brewer were horrendously patronising in this Sky News video (the latter particularly so, after claiming today that Owen Jones had a lot in common with ISIS!!), I despair.

I attended a vigil yesterday evening in London's Soho and was moved by the display of solidarity.

After the crowds began to clear, I bussed it up to the Roundhouse for a rap vs poetry battle event, which was full of camaraderie and lightness, as much as it was about adversarial wordplay and - often gendered - put downs. I walked home into the night and thought about the climate of fear and conflict I'd landed back into, which walks alongside the tightening bonds of community around me. Nothing is straightforward.

*p.s. Vanessa Kisuule smashed it (under her alias Shonda Rimez!)

Nothing is straightforward. Living in the United Kingdom - arguably one of the most 'fantastically corrupt'* nations in the world ;) - in an uncomfortable union of states (Scotland nearly voted out of the union last year, Northern Ireland and Wales both have strong separatist elements - with good reason - and London's demographics and power separate it from much of the rest of England), under the umbrella of the EU, which itself is a messy, cumbersome collaboration between nations that barely see eye to eye, it's easy to argue the case for leaving the European Union. Add to the mix the stirring up of distrust: of immigrants, of Islam, of trade deals, of everything... it's tempting to believe that separating ourselves from one layer of bureaucracy could be a magic solution for 'making Britain great again' and not creating several more complications and struggles.

The xenophobic undercurrent coming from the far right which has perpetrated mainstream discourse is going to be a difficult one to eliminate. The ideals behind making 'Britain great (again)' completely fail to acknowledge that what made this small island 'great' in the first place involved the mass exploitation of people around the globe. It involved genocide, rape, war, economic suppression, subterfuge and bloodymindedness as much as it involved genuine innovation and self-determination. Most importantly, it relied on that most effective of weapons: divide and rule. And that's exactly the tactic I feel is being played out on the British public. I've said enough.

*in case you don't get the 'fantastically corrupt' reference, here it is...

One of the main reasons for my Jamaica trip was the Calabash Festival, held at Treasure Beach. I will have to write more about Calabash and Jamaica in general. There's so much to say and so much awesomeness to savour!

I met Stefanie Seddon, Canada & Europe regional winner of the 2016 Commonwealth Short Story Prize and fellow Birkbeck student, who wrote this article about the Calabash experience (I get a li'l mention at the end).

I also met up with friends Raymond Antrobus (who got a massive big up in the Jamaica Gleaner yesterday) and Malika Booker (who's going to be part of the new Penguin Modern Poets series, announced yesterday in the Guardian - wha!!!!) and more. There were some pinch-yourself moments, particularly when stepping on stage for the open mic, with the sea behind me.

Here's a video I filmed the day after:

The next couple of weeks will be jam-packed, with both poetry events and academic conferences coming up among my usual writing and research endeavours. I'll be updating my 'Upcoming' section later but, for the moment, here's a list of what's coming up next: