Two weeks ago, I was performing inside a giant eyeball and it wasn't a dream... 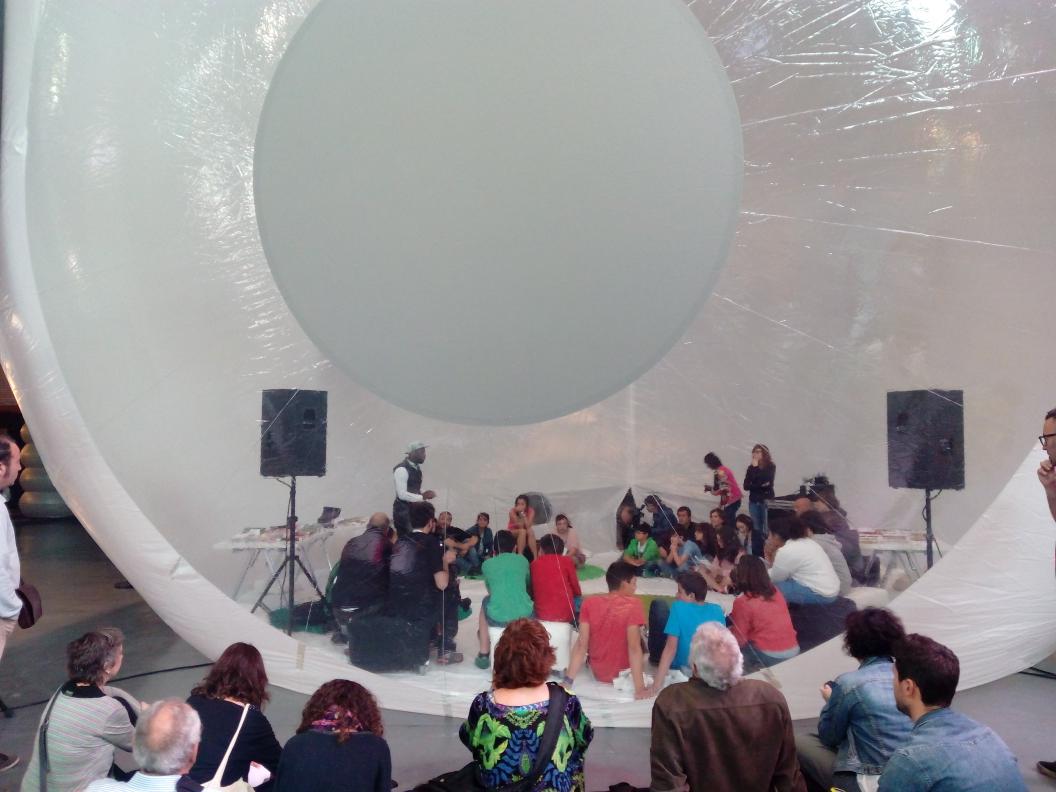 ...and it wasn't the kind of thing I had on a list of 101 things to do before I die, either. It wasn't even something I knew I was going to do before I arrived in Bilbao, to take part in the 3, 2, 1, International Festival.

You can hear my nerves two days before the show, in this video:


I was pretty overwhelmed, after a morning teaching poetry workshops at a local secondary school... in Spanish. What they always tell you about language is if you don't use it you lose it. I hadn't been in a teaching situation with Spanish-speaking pupils for at least 8 years... and even then, that wasn't in Spain.

There are different ways of addressing groups of people (vosotros/ustedes/vos...), depending on which country you're in and your relationship to the listener; there are also different words for certain objects, according to which country you're in, sometimes mutually intelligible, and often not; add to the mix me, a non-native speaker who has picked up elements of different Spanishes and hasn't had to talk formally in any of those for a long time. Despite listening to Spanish radio every morning for a few weeks beforehand and meticulously looking up certain phrases I might use in the classroom (hoarding = síndrome de diógenes), I was nervous that I'd lost it somewhat. What was I doing there?!

When I'm in a multilingual situation, my tongue trips over words a bit more than normal, until I start to settle. When I'm surrounded by people from different fields, that much more so. The world and language of performance poetry can be pretty specific - or, dare I say, limited.

I'd stepped off the plane, was picked up from the airport, put my bags down, and was immediately met by hosts and taken to the Alhóndiga/Azkuna centre, where the festival opening was taking place, down at the gallery level. With my scruffy t-shirt and jeans, and even scruffier half-beard, I enjoyed the contrast of smartly-dressed, smiling faces, holding beers, and pondering the walls of photographs, one of the festival's centrepieces. I didn't feel out of place, exactly; I felt rock star, making my grand entrance, scoping out the venue, grabbing my own quota of free beer, until... until...

It was at this wall of photographs, standing next to the festival's director and the programmer, with little to say in any language other than "qué interesante" and "me gusta", that a friend's words came back to me. I'm appalled at how little British poets spend time getting to know art from other disciplines. I felt illiterate, a feeling not uncommon for everyday people who end up at a gallery. But this wasn't an everyday situation, given who I was standing next to!

In my weak defence, since last year, I make a point of going to see some art exhibition or another every month, and I get friends to recommend me new music every now and again, but I very rarely connect it with my own writing. The spoken word scene is so accessible and informal that it doesn't seem compatible to me. As for the more "formal" structures of writing, I spend so much time criticising the stuffiness/incestuousness of the established poetry world (and there is a lot to laugh at, including the storm surrounding the poem the LRB published recently) that I don't really engage with anything else aside from my own politics and personal life when it comes to poetry; when it comes to my fiction, I'm still finding my way, but I've been so set on completing the novel - a very established, semi-stagnant form - that I have little room to see how changes in art/photography/music/dance/sculpture might impact it.* And so I'm not used to being anything more than a passive observer.

I hadn't heard of Ray Lee before, a British artist whose Sirens project was beyond the wall of photographs, featured as a two-month installation at the centre. Nor had I seen John Berkavitch, a poet who I knew of, as our paths have crossed before a few times (and he arrived at the festival just as I left!). Until I had received an invite to the festival, I hadn't been aware of the Basque tradition of Bertsolaris, either, poetry/song improvisers who take part in competitions that attracts thousands (see link for a video about this). The problem is I can't have heard or seen everything, but the more I do find out about, the more I realise there is to investigate.

I'd been asked to put on a "poetry slam"** show, which was later clarified by the organisers: I wouldn't be putting on an actual slam or an auto-slam - battling against myself - but they wanted the energy of a spoken word show in a multi-disciplinary environment. I'd be performing in English - with brief Spanish asides as I segued between poems - and my poems would be translated into Castillian Spanish for the audience and printed, so they could refer to the translations at any point. 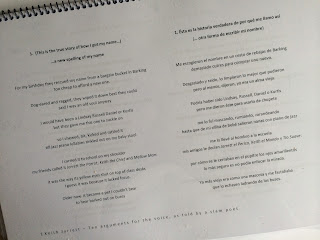 I can only begin to describe the emotional impact of sitting in a hotel room on a Wednesday night, swigging from a bottle of shop-bought gazpacho and reading through thirty-odd pages of my poems that had been translated as faithfully as possible by a professional; the feeling that someone meticulously combed through the words, a stranger who mostly understood my propensity to play around with double meanings and very specific cultural reference points. It felt like a warm hug that lingers too long, squeezes a little too tightly, finding the knots on your back you didn't know were there.

It was incredible reading my own work through another lens, and it was pretty much spot on. But there's no such thing as a perfect translation. A very basic example: "the" has no direct equivalent in Spanish... when it becomes "él" or "la", it takes on a gendered quality that doesn't really exist in English; by the same token, something written in English sheds some of its meaning when the wordplay and slang has to be made slightly more neutral***, but the extra nuances it gains as the sounds of words make different patterns is spectacular. I can't wait to start memorising some of my poems in Spanish; I will feel like I've gained a new set entirely, without having written anything.... Props to the translator, whose name I still don't know!

By the third day of school workshops, I felt as if I'd been there for ages. My language came back. The kids were great. I spent ten minutes high-fiving everyone before saying goodbye (in the Basque language: "Agur"). That emotional connection you get from teaching, when a previously lost-looking pupil just gets it, when you come to the end and have to repeatedly tell them to put down their pens, that it's time to finish up, that feeling when you can tell that it's not the end for them, that they'll write more again, share more... that you haven't put them off writing for ever, after all... that feeling is priceless.

I did my thing later that evening, coming face to face with the eyeball, giving it all I had with my poetry set and frequent riffs in Spanish. Some of the pupils came to see the show, and I was again very nervous.

They'd had time to flick through their translations and I'd noticed giggles and whispers before the show as a few of them discovered the point where I break between two poems and deliver a haiku: 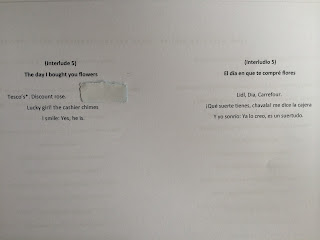 Given this, and the fact I was mostly going to be speaking in English for 45 minutes, I expected a negative reaction from one or two pupils during the performance. Contrary to expectations, they were attentive and engaged throughout the whole performance. There was a very mixed audience sat inside, or stood/knelt/sat outside and it was crazy! I liked being inside my bubble, moving around the space, tapping at the transparent section and waving at passing spectators.

Halfway through, I took a deep breath and muttered to myself: "You better remember this moment". I'm sure I'll continue to do exciting, unusual and challenging things as time goes on. I just hope to always retain that feeling of wonder whenever I step into a new situation.

*The insularity of spoken word poetry goes both ways, of course. The spoken word scene is undergoing many subtle changes across the country and worldwide, yet the language used to describe it by outsiders isn't changing. It's still seen as an "underground" or "emerging" movement, hip-hop's milder, beat-less cousin... and those who run spoken word workshops with young people aren't shown to be the literary pioneers they are; instead they are speakey-spokey social workers (please check that link to see the extent to which words can be twisted. It's actually quite disturbing... and reminds me of a similar angle I ended up allowing an interview to go ten years ago!)

**Still don't know what a slam is? Try reading this page or watching this brief video explanation. Or, just Google it.

***In one of my pieces - yes, I said pieces -, I use the unfortunate word "sket", a word which even people in some London audiences won't get. Whenever I take that poem out of London, I use "hoe". (I really hate both words, but I have to use them to chart my journey out of self-defensive teenage misogyny). If I'd kept "sket", the translator would have had to find the equivalent of a word that has been shortened from another dialect (search for the origins of "sketel") and found common usage among a teenage late 1990s population wherever the target audience is. It's an impossible task; so some implications about the subject and the listener of the poem get lost. Also, when I say "there are too many wrongs/ to write" in another piece, the translator, of course, had to make the decision to stay faithful to the words written and not the tension between "write/right". There's no other way of doing it without over-complicating a simple statement.
Posted by thinktank at 13:26 No comments: Links to this post 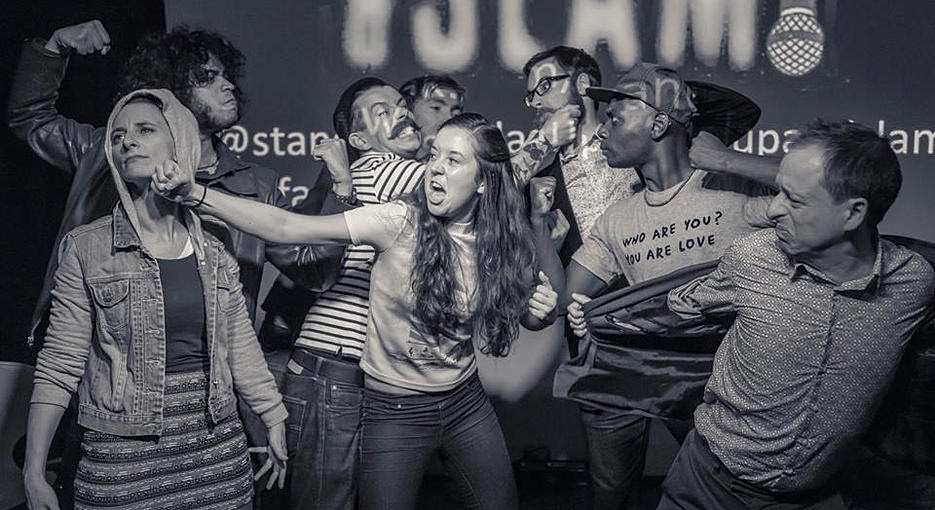 Apologies for the late post but make it if you can!

Once again, we'll be pitting ourselves against the might of the stand-up comedy crew, proving that words and verse are more powerful than jokes alone... with Camden Comedy Club (upstairs at Camden Head). It'll be a compact, Edinburgh-show-style hour, following Mark Watson's work-in-progress show.

Details are to be found here.

Posted by thinktank at 18:50 No comments: Links to this post

Postcard from Home: No ifs... 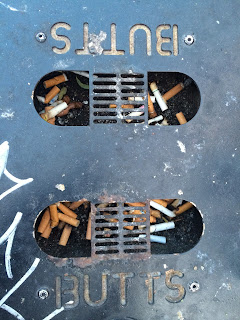 Posted by thinktank at 10:29 No comments: Links to this post

Postcard from Home: If You Want Your Head Smashed... 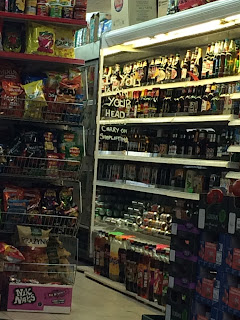 Posted by thinktank at 23:11 No comments: Links to this post