On Thursday, I'll be at the British Library, reading out my Golden Shovel poem alongside 18 super poets, as part of an anthology launch. The line-up is immense! I'm not even going to begin... Ok, more details can be found here. You can also get the anthology here (it's already been described by NY Times as one of seven timeless poetry collections - ever - and it's only been out a couple of months!).

You can also hear me discussing it last Sunday on Jumoké Fashola's show Inspirit, BBC Radio London (from 2:48:52). Strangely, there are still tickets available for Thursday's event, so get them!

2) Penguin Pride @ Proud (there's a tongue twister for you)

I've also been busy at Penguin HQ, being interviewed for Gay Times and reading out a poem as publicity for the Penguin Pride event at Proud Camden (scroll down for an interview with Toby Campion, and follow links for his poem as well). I'll be performing alongside Toby and MC Angel and... check it out, KELE!! Whaaaaat???!

Once again, there's still a few tickets left so, er, get them!

As part of a series of events commemorating 50 years since the (partial) decriminalisation of sex between men, I was interviewed for an exhibition, currently on at the British Library (so check it out). I also have a monologue which I've mentioned before, on at the Old Vic Theatre, in just a few weeks' time.

It's been a busy few days and I've hardly had the chance to catch up with myself!

a) A week ago, I chanced on a poetry trail at my local park! I wanted to write more on this but, alas, I haven't had the time. I may do later: 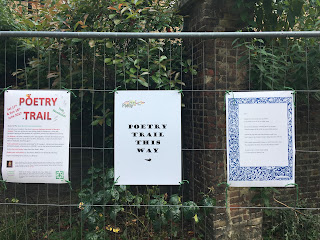 b) One of the highlights of the last few days has been attending the Goldsmiths Caribbean In/Securities and Creativity conference.

c) I had to interrupt my conference attendance yesterday to slink off to the Houses of Parliament! There, I met with young people I've been working with at a Hackney school over the last couple of months, for a Speak Up project designed by Ministry of Stories.

First, we did a tour of the Palace of Westminster, then headed off to a room where they were able to deliver speeches in front of a mixed audience: their local MP Meg Hilier and Hackney councillors, Ministry of Stories leaders, including Nick Hornby, volunteers and more...

I was extremely touched by their passion and confidence. In just seven or eight sessions, these young people managed to think about what they strongly believe in, create a two minute speech expressing these beliefs and then work on public speaking skills, battling shyness with each other, plus all the usual self-esteem issues 12-14 year olds have, plus the prospect of speaking to an unknown crowd in a grandiose building such as that one! It's the third time I've led this project and I'm really honoured that I get to do work like this! 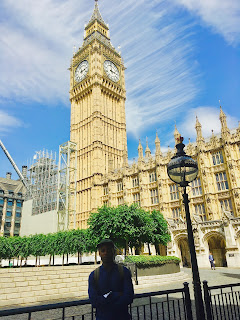 d) I could go on... but, looking ahead, there's more great stuff. Tonight I'm presenting some work in a conversation with Malika Booker for Corkscrew, a society for practice-based researchers at Birkbeck. Then I'm in Basingstoke for Come Rhyme with me, then the Golden Shovel launch, then I'm doing a school event in Huddersfield, which I'm super excited about, then Penguin Pride... then... then... I have links to all the public gigs in the 'Upcoming' tab on this page.

Meanwhile, I'm writing up some of my research and my novel, so it leaves me little time to update on here, so expect shorter updates (but hopefully more regular)!

If you've managed to read this far then.... [applause] well done!

I've spoken a bit about my new book Selah and I think I've shared the interview I did for Burning Eye. I was also chuffed to see it in the window at Gay's the Word bookshop on Marchmont Street (right next to Ocean Vuong, who is a poet you MUST read!):

I haven't had an "official" launch because, reasons. But I genuinely want people to read it and, hopefully, enjoy it. So, the first 5 people to read this and email me (before Thursday 29th) can get a free copy. Postage, everything included. In addition, I'll give another five copies away to those with a ticket for the Golden Shovel event or Penguin Pride. Just email me by Thursday, turn up and I'll sign your book.

If you miss out, it's only a tenner, otherwise. Just click on the link to buy at the top of the page, where you can also get a hold of my I Speak Home pamphlet. Or come see me at an event. Or go to the Burning Eye website. Or to Gay's the Word. Or pester your favourite bookshop... oh, the options!

Posted by thinktank at 15:00 No comments: Links to this post