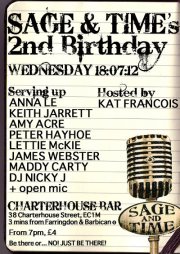 Time flies! Today marks the 2nd anniversary of Sage & Time, which takes place at Charterhouse Bar. It should be a stacked event, a lot of talented poets plus DJ and hosted by the warm and very funny Kat Francois, so come early for a seat... and even earlier for an open mic slot!
Posted by thinktank at 17:50 No comments: 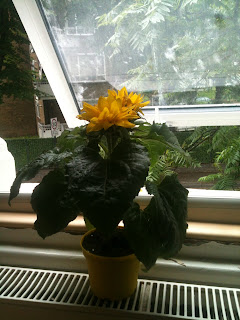 (A word which stems from its latin root, planta, apparently)

Ok, just in case you have no clue what this is about, I do these random words every few days using the generator on my links bar, to the left. The idea is I might find these words spark the seeds of creativity - and occasionally I use them for freewriting - or just as a good way to waste five minutes of my day. And sometimes, simply, to show off the sad sunflowers trying to stay warm on my window.
Posted by thinktank at 17:45 No comments:

Next Gig - Word on the Water


As part of the Regents Canal Festival, I'll be performing at Word on the Water tomorrow (Sat) between 1 and 3pm. Please come along! It will be great + and it will be on top of a floating bookshop ++.

Posted by thinktank at 17:59 No comments:

Very British, I know, but I'd like to take a moment to moan about the lack of summer so far. Despite official drought conditions, including hosepipe bans, both April and June this year have been the wettest for over a century. So when it's been dry AND sunny at the same time, I simply have to venture outside, just in case it's my last ever opportunity to feel warm.

Today's walk up to the coffee shop and back took me past a building which is finally being demolished. I can't help feeling attached to certain buildings, regardless of their aesthetic appeal. The same also goes for my writing; after redrafting certain chapters of the novel over and over again, I've learnt there are things that have to face the chop: pretty, well-crafted sentences, paragraphs and asides that just won't cut it in terms of getting the story to where I want it to be. In their place, I hope something more long-lasting will rise, but I'll keep you posted...

And In Other News... (excuse the language)

It's great that we live in a democracy where you can use the words "fucking black cunt", be taken to court, and then given a not-guilty verdict for racism. In all fairness, the circumstances are about as unclear as they get: apparently the footballer in question was simply repeating an accusation against him. But I do hope it allows us to discuss racism in a more honest, open way without patronising, trivialising or going crazy.

And on a lighter note (lighter! get it?) a website that makes me laugh.

So, of course, I pass the local Waterstone's bookshop and browse through the chart list (hoping one day a novel by Keith Jarrett will top it!) I've kept my head in the sand book-wise, as I need to read through piles of stuff before I can afford to buy new books - there just isn't the space in my flat any more.

I'm intrigued: I haven't seen anything like three books that look exactly the same on the top of a chart list for ages - well, at least since the Harry Potter era. I skim read half a page but it doesn't grab me and I still don't know what it's about and my phone rings anyway - and anyone who knows me knows I'm a polite kind of guy who doesn't like to shout WHAT!? I'M IN A BOOKSHOP! when I'm on the phone - so I kind of made a quick exit and almost forget the whole thing.

Then, despite not having read the books, I had several immediate reactions:

Having thought all of that, my reactions haven't been as strong as a good friend of mine who posted the following on Facebook today:


[I wish] death on anyone reading '50 Shades of Grey'. If that includes you, may I please suggest the 'unfriend' option?

So, for the sake of friendship, I shall comment no further!

Posted by thinktank at 17:55 No comments:

Posted by thinktank at 17:11 No comments:

The Tea Box is hosting some solid storytelling tonight with Paul Eccentric.

It's going to be great. It's going to have Anna Le, me, some stories and poetry, and the opportunity to buy tea... what more do you need on a Friday evening? Come along!
Posted by thinktank at 12:18 No comments:

(Great. Yet another thing to bleat about)
Posted by thinktank at 11:36 No comments:

What I Was Going to Add (giving props where due)

...I was fortunate in the last Slam I was at - the two poets that touched me the most were the ones who approached me afterwards (even though, in the post-performance adrenaline rush I didn't say so in as many words). I'm learning to change my habits, but if someone or something makes me think, I usually slink away and ponder it for a while - and I don't tell them directly. Likewise, if someone I don't know comes up to me after a poetry set and says they like a poem I've performed, I get mildly embarrased about it, even though I appreciate it later. In fact, having someone I really respect and admire comment on my blog once almost crippled me for about a week, which is weird, considering part of the reason I write is to be heard.

So anyway, there were these two poems that I connected strongly with. The first was by a poet from Bath, Thommie, and it was a desperate poem about heartbreak and the various ways in which she could cure it by finding a religion. There was some sharp humour there too - one line went something like: "Who cares if the Pope was a member of the Nazi League? I don't want a Pope. I want a higher being". There was something honest and raw about it... and yeah, I found it touching, and it's stayed with me all week. I'll try and link the poem when the video comes up from the night, and maybe I'll write more.

The other poet, Ben, was from Birmingham and he did a seriously humorous take on the role of swearing on the mic - "F-bombs" and all - and how some people are too precious about it.

So, great, it's a family event, you've been told, just as you get on the stage, and you have to mentally scan everything you'd planned to say, just in case it might be deemed offensive. The problem is, when a family has to rely on a poet's auto-censorship skills in order not to be corrupted, there's a real issue!

I'm mostly against censorship because it's difficult to draw the line. I'd prefer if people weren't bigoted, racist, sexist, violent, homophobic or just generally ignorant and foul-mouthed just for the sake of it, but I don't believe thought and expression should be over-policed. An easy way to deter people who are truly offensive is to boo and heckle. In my experience, poetry audiences are far too polite... I even once sat most of the way through a poem at a slam where the poet seemed to be justifying his sexual advances towards some of his (teenage) pupils and, aside from a few shocked faces, no one challenged him. But, crucially, the poem contained no swearing, so it was permissable. In fact, there are situations I can see where his poem would be allowed and one of mine (Tell Me...) wouldn't be, because of the word "fuck" at the end (which I have, unfortunately, had to alter a few times for "family-friendly" occasions).

Part of the reason I had to end the poem like that was because it reminded me of a teacher - also a clergyman at the time - who gave a talk in an assembly when I was at secondary school. I was maybe twelve or thirteen at the time. The details are fuzzy because I was switched off and it was early morning, and he was boring. He said something about world poverty and starving children and help and doing something, or even just caring about it and then at the end he said something like "most of you don't give a shit". He finished: "In fact, most of you are more interested in the fact that I've just used the word shit and you haven't even got a clue what I've just said". He walked out and, I believe, he quit his job soon afterwards.

I still, to this day, feel like a real shit after that speech. He was right. Unlike other schools I've worked at recently, it was a bit of a shocker if one of our teachers swore - let alone a religious one - in an assembly and in front of other staff, including our stern headteacher. And so we talked about it all morning. Had he finally lost it? Yet the really important message - part of which I recall was about engaging in the world beyond our petty squabbles - had been completely eaten away by that self-same pettiness and lack of outward thinking that he was talking about in the first place. We were using much more offensive language between ourselves - and sometimes at teachers - both inside and outside of the classroom so we had no right to be that sensationalised by one word.

What I love about (good) Spoken Word is its rawness; it's all about the poet and the mic, without all the frills of music and props. If a poet is going to express themselves fully, they should have the right to swear and holler all they like. If what they say is truly odious, they should be challenged or shouted down. Of course, children should be encouraged to engage with poetry from an early age. They should also be protected from topics they're not ready for.

But, leaving behind what should happen is the basic reality that if you limit the types of words poets are allowed to use, you are watering down freedom of expression, which in turn can mean patronising an audience with words the poet thinks they should say, rather than the ones that they have. Because children often swear themselves. And they know adults do. Creating a veneer of prudishness only protects those who wish to deny those two facts, in the mean time, distancing others from the real essence of Spoken Word. Of course, everything in moderation, but I think I'd rather children hear adult language in the context of creative performance than only elsewhere.
Posted by thinktank at 03:02 No comments: