So Easter's been and gone. It's always been a reflective time for me and still is, not least because the novel I'm writing revolves around the week leading up to Easter. I've also had a bit of a 'system overload' of late - a lot of stuff going on, too much to comment on, and the vague feeling that it isn't worth getting involved in it. 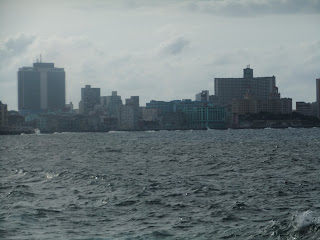 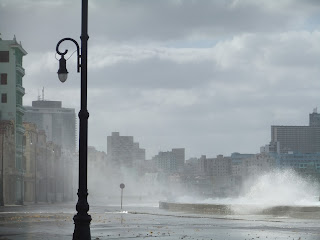 Whenever I feel this way, I look to the sea. The waves come and go and there are a lot of obvious metaphors you can take from it: for instance, that life has it's ebb and flow and there are days when things are going to be easy... and other days when the tide just brings in a lot of rubbish. Some days things are choppy... other days you just need to be still.

Blah, blah blah. You get the picture. 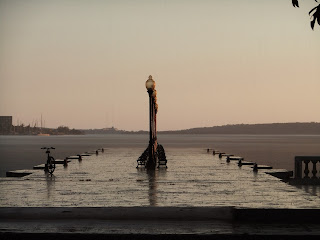 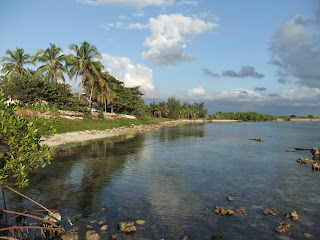 Being miles out from the sea in the Smoke, I've taken a shortcut - I've been flicking through photos from the trip I took over Christmas. It's brought back some good memories which have helped me get back into some kind of rhythm in my writing.

Whilst I manged to record a storm in Havana and a few miles of empty coastline, the most interesting things that happen are, of coure, when you put down your camera. In my photo albums, there's nothing of the deserted caves I found at night, and nothing could quite capture the feeling of swimming in the cool sea.

A picture saves a thousand messages

On a related topic, I was thinking how interacting on social networking sites such as Facebook has a way of filtering experience into a few photographs and comments that only give one side of the story.

Today, I was bored enough to check out the page of a "friend" of mine who I haven't seen or spoken to since we left school back in 2002. He smiles holding a baby, among faces I assume to be members of his family, including a sister I recognise (the comments underneath confirm this). He wears funny hats and makes goofy impressions next to people I don't recognise (I'm guessing work colleagues, but who knows?) In later photographs, he's lost weight and I remember he used to get teased about it so I assume he's happy now (at least he's smiliing). He smiles again next to a girl I can infer is his current girlfriend (she is tagged as such). He smiles next to a well-known celebrity. And again in some basketball court somewhere in the States, and then again at a famous landmark, also in the US. The pictures go on...

After under five minutes of scrolling through his page, I've had my fill of this old friend, immortalised in smiles; I feel I've caught up on nine years worth of friendship - he's happy, in a relationship, has lots of family around and is in a job; most of all he has good teeth. And yet, I feel uncomfortable that I've used the moments he's chosen to add onto the website as a way of developing a picture of his life... I have little intention of getting back in contact after all this time but, somehow, by scrolling through his snaps and a few comments on them, I feel I've done that. Yet, really, it's the moments away from the camera that matter most...

But pictures are powerful. No wonder Facebook has recently made a whopping huge gamble by buying up Instagram for $1bn: the image is king and we're starting to learn it - we're all becoming amateur photographers. As we get overloaded with information, we need more shortcuts to process it all, and a picture can do the trick in a split second, whereas words, dialogue, direct interaction, all of that takes time and effort. I could have had a conversation with said friend. But the information I gleaned from looking at a few photos would have taken much longer than the few minutes it took for me to scroll through his life if I'd actually sent him a message and waited for a reply.

As a child, every time I made a rash judgment about someone, my mother would always quote: "Don't judge, because the way you judge others will be used against you..." Hmm. Just the thought of that makes me want to delete my Facebook account forever.
Posted by thinktank at 00:22