The past few weeks have been pretty busy! After I'd planned a quiet summer, keeping my head down, working on the novel and otherwise doing nothing but soaking in sunrays and lazing on (preferably warm) green grass and grazing on ice cream and Olympic-sponsoring snacks (OFFICIAL CEREAL BAR OF LONDON 2012, one such snack wrapper reads. Say whaaat??) life decided to take another few detours, meaning I ended up in Boston for a couple of days, followed by New York a couple of nights, followed by London again then Edinburgh, then off again a couple of days before Edinburgh again.

So my jack-in-a-box summer has been a bit of a surprise, just like a long jumbled sentence that comes out at 3am on a Friday night after a late-night dash to the takeaway! But it's been pretty good... 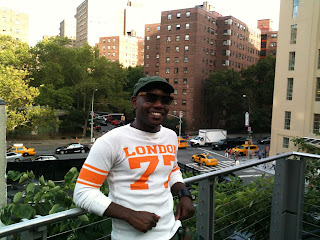 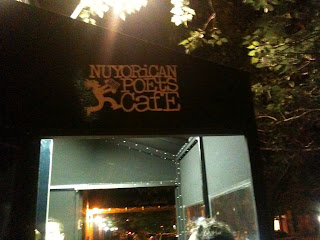 In New York, I managed to make it over to the Nuyorican Poets Cafe just in time for the poetry slam. Coming second in a slam full of a very talented home-grown and international demographic was a thrill I won't forget any time soon.

It also crystallised some of the feeling I've had about the transatlantic poetry phenomena. In short, most American slammers I've heard like to go in deep and heavy: as an example, in just two gigs I heard three poems about rape, another three about race, two about eating disorders, several about absentee parents, yet more that could be classified as feminist - in the sense that they were actively discussing gender equality - and the rest were either about growing up in a tough neighbourhood or about how idiotic One Direction are (poor things - we've let One Direction loose Stateside!)

Most poetry slams I've been to in the UK are a lot tamer. I don't believe there's a right or wrong when it comes to what you write, provided it's authentic (i.e. from the heart) and not just following trends. But, of course, it made me consider why and how I write my own poetry. As I stated in a post just after Mother's Day last year, there are some places I never feel good to go, and I think it has less to do with my British reserve than a wish to keep just a few things to myself. But, who knows, that may change... 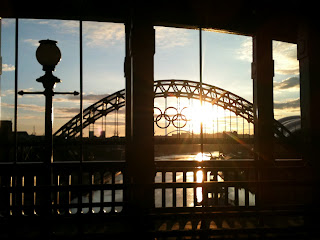 Edinburgh was also one cool place to be earlier this month. After finding the cheapest train tickets available (still more expensive than a flight to Barcelona), I found myself with a three-hour wait at dawn in Newcastle before catching the 6.20 beyond the border. I caught a beautiful sunrise over a five-ringed Tyne Bridge, bags in hand after trekking the drunken streets around Newcastle and Gateshead. 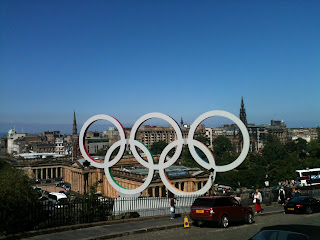 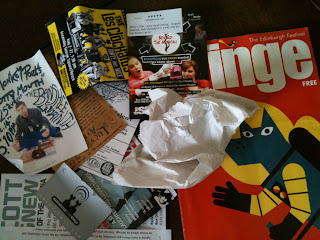 Edinburgh during the Fringe festival is always a dynamic place to be. I haven't been for a couple of years and forgot how tiring it is walking the Royal Mile, every last inch of space taken by student thrusting flyers in unsuspecting faces! I thought I'd mastered the impassive city look - head down, walking with purpose etc - until I came back home and realised I had an armful of flyers for shows and plays I will probably never see.
But what I did see was either funny, heartwarming, challenging - or all three...

I'll fill in more of this when I go back again next week! But so far so good from Richard Marsh and Katie Bonna's Dirty Great Love Story to Richard Tyrone Jones' Big Heart (complete with a fainting audience member) and right along to Monkey Poet's refreshingly raw show... Ok, I'm going on a bit... but it was good. 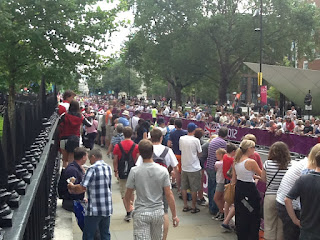 Back in London and we've supposedly been all 'Lympics mad. I think months of everyone telling us the world was going to end and the relief that it hasn't - yet - has made it quite touching. Whenever I got close to a TV, I ended up cheering for things I'd never dreamed of watching (WATER POLO???) and not being so bothered by sightings of the Union Flag...